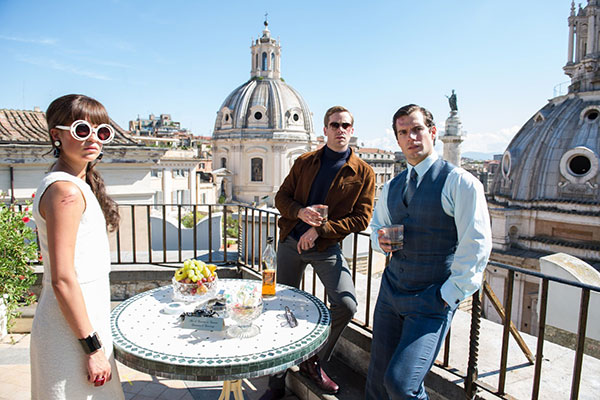 The Man from U.N.C.L.E. (PG-13 for violence, suggestive material and partial nudity) Henry Cavill takes on the title role in this adaptation of the hit TV-series, set in the Sixties, revolving around a CIA Agent who joins forces with a KGB operative (Armie Hammer) to prevent a mysterious criminal syndicate from acquiring nuclear weapons. With Alicia Vikander, Hugh Grant and Elizabeth Debicki.

Underdogs (Unrated) Animated fantasy revolving around foosball game figurines who come to the assistance of a nerd (Matthew Morrison) who needs to win a match against the best soccer player in the world (Nicholas Hoult) in order to hold on to the woman of his dreams (Ariana Grande). Voice cast includes Taran Killam, John Leguizamo, Brian Doyle-Murray, Chazz Palminteri and Bobby Moynihan. (In Spanish and English with subtitles)

Air (PG-13 for violence, profanity and sexual references) Futuristic sci-fi about a couple of engineers (Norman Reedus and Djimon Hounsou) who represent the last hope for humanity after the planet runs out of oxygen. With Sandrine Holt, Paula Lindberg, Peter Benson and David Nykl.

Amnesiac (Unrated) Psychological thriller about an accident victim with memory loss (Wes Bentley) who wonders whether his wife (Kate Bosworth) might be lying about her true identity when he emerges from a coma. Featuring Richard Riehle, Patrick Bauchau, Shashawnee Hall and Olivia Rose Keegan.

Fort Tilden (R for profanity, sexuality, graphic nudity and brief drug use) A day-in-the-life comedy chronicling the frustrations encountered by a couple of BFFS (Bridey Elliot and Claire McNulty) bicycling to a beach in Brooklyn. With Griffin Newman, Nell Casey, Alysia Reiner and Reggie Watts.

The Lost Key (Unrated) Marital bliss is the theme of this documentary chronicling a middle-aged man's search for sexual fulfillment with a new wife in the wake of a traumatic divorce from his first.

Meru (R for profanity) “Because it is there” documentary tracing the route taken by a trio of elite climbers as they scale the face of the Himalayas' Mount Meru.

Paulette (R for profanity and drug use) Bernadette Lafont plays the title role in this crime comedy, set in Paris, about a recently-widowed pastry chef who starts selling pot when she finds it impossible to survive on her meager pension after being forced to close their beloved bakery. Cast includes Carmen Maura, Dominique Lavanant and Francoise Bertin. (In French with subtitles)

Return to Sender (Unrated) Revenge thriller about a small town nurse (Rosamund Pike) who is left traumatized after a blind date with a violent criminal (Shiloh Fernandez). With Nick Nolte, Rumer Willis and Camryn Manheim.

Tom at the Farm (Unrated) Out-of-the-closet drama about a grieving cosmopolitan's (Xavier Dolan) announcing his late lover's sexual preference to country bumpkin next of kin attending the funeral. With Lise Roy, Manuel Tadros and Evelyne Brochu. (In French with subtitles)

We Come as Friends (Unrated) Neo-colonialism is the theme of this road documentary chronicling a modern odyssey across Africa featuring everything from Chinese oil workers to UN peacekeepers to Sudanese warlords to American evangelists. (In Arabic, English and Chinese with subtitles)