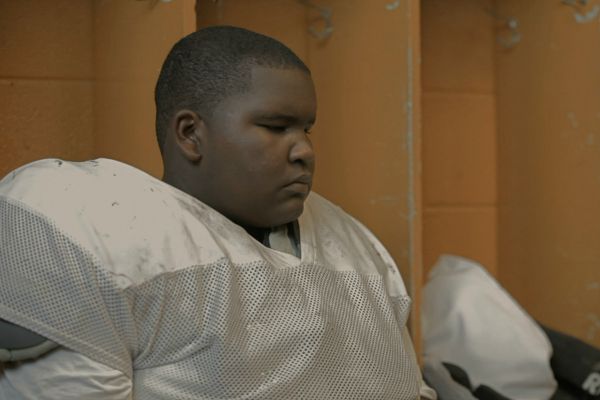 It’s an overcast day in Cleveland, Miss. Golden sun rays trickle through trees as an obese teen runs through the woods. Davion Bland comes to a rest and speaks of his dream to become a football star.

Davion practices at a football camp, but he quickly gets tired and has to sit on the sidelines. Angry and dejected, his obesity threatens his dream and his life.

“I can't even participate through the whole thing,” he said. “I've got diabetes already, I might not probably live that long. I want to live as long as everybody else.”

Davion’s story is told in the new documentary, Bite Size, which follows four teens from around the country on their journey to become healthier and lose weight.

The film will be screened July 29 at the Clinton Street Theater. Proceeds from the screening will benefit the Alliance for a Healthier Generation, a non-profit organization working to eliminate childhood obesity.

The event will also feature a short presentation on BEYOND 7/2, a record-breaking challenge by Colin O’Brady. The professional athlete will attempt to climb the tallest peak on every continent within 6 months. Through this feat, O’Brady hopes to raise $1 million to combat childhood obesity.

According to the Alliance for a Healthier Generation, about one out of every three kids is overweight or obese. These children are more likely to be overweight adults, carrying this extra weight throughout their entire lives.

Overweight children are at risk of suffering from type two diabetes and asthma, and are more likely to develop heart issues as adults.

In the documentary, Davion gives a first-hand account of diabetes. He was the youngest in his family to be diagnosed at age 12. His bulky frame is well-suited to a tackle position, but due to his diabetes, his legs give out from under him and he is easily knocked over.

The other teens in the film don’t fare much better than Davion. One is Los Angeles is pre-diabetic. Another lives in a world where most of her peers and mentors are either diabetic or pre-diabetic.

All of the teens are the victims of bullying because of their weight, leaving them scared, aggressive and on the edge of becoming bullies themselves. Both Moy and Davion respond to taunts with violence, keeping a hard public face while breaking down in private.

“Bite Size” explores the networks and influences surrounding the youth, from after-school athletic programs, to non-profit nutrition education classes, to weight loss camps. The parents struggle to find the right motivation to keep their kids active and engaged.

The parents and mentors themselves become entwined in the narrative. As the teens struggle with their weight, their parents eat fried pork chops, McDonald’s cheeseburgers and Cheetos cheese puffs around them. One of the teens literally grew up in a candy store, as her father managed a fudge shop.

The documentary touched on the relationship between poverty and obesity. Two of the featured teens live in Mississippi, which is one of the poorest states and has one of the highest rates of obesity. The youth are surrounded by dense, cheap, processed foods and they aim to eat their money’s worth.

A particularly heartbreaking scene from the documentary was when Keanna’s school counselor, Lisa Ross, learns that there will be no budget for physical education equipment. Ross, who is living with diabetes and trying to help kids lose weight, falls apart when she hears the news.

Bite Size shows the efforts to reach kids where they are and teach them skills that they will use for the rest of their lives. It emphasizes the importance of networks, support groups, mentors, family and friends.

Ross also believes the best motivation for healthy living comes from loving oneself. Towards the end of the documentary, she summed up her thoughts: “If you don't see no good about yourself, I don't care how much weight you lose, it's coming back.”

For more information, visit the website for Bite Size or attend the screening.