Film Review: ‘The Gallows’ Blurs Line Between Fact and Fiction 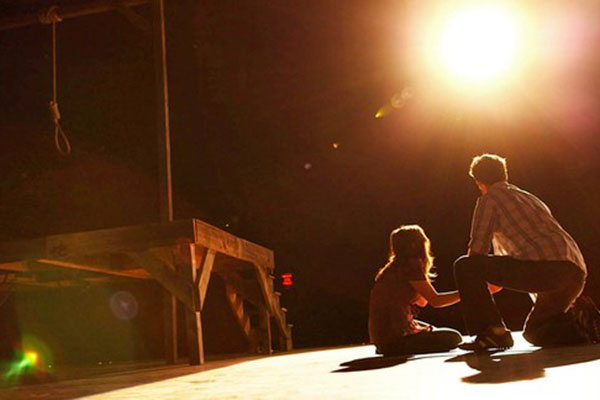 Back in 1993, a student accidentally died onstage during the opening night performance of “The Gallows,” a macabre play being staged at Beatrice High. The unfortunate understudy, a last-minute replacement for the suddenly-indisposed star, was somehow hanged when the noose around his neck actually functioned when the trapdoor under his feet gave way.

Fast-forward twenty years and we find the school's theater club planning to put on the same production, ostensibly as an attempt to pay homage to the kid who lost his life. Drama teacher Mr. Schwendiman (Travis Cluff) is now overseeing the well-intentioned project with the help of a nerdy, student stage manager (Price T. Morgan).

In terms of the casting, Pfeifer (Pfeifer Brown) has been picked to play the female lead opposite Reese (Resse Mishler) who will be reprising the role of the ill-fated protagonist. Other critical persons of interest for these purposes include football team captain Ryan (Ryan Shoos) and his cheerleader girlfriend Cassidy (Cassidy Gifford).

Ryan also just happens to be an amateur filmmaker with OCD. So, he constantly keeps his hand-held camera on “Record.” That annoying habit might prove valuable should anything tragic transpire on campus, even if the shaky images are terribly dizzying.

In fact, these clues are all the police have to go on to decipher what happened in The Gallows, a found-footage flick co-written and co-directed by Travis Cluff and Chris Lofing. The movie is a worthy addition to this low-budget, horror sub-genre inaugurated by The Blair Witch Project in 1999.

Just as in Blair Witch, the characters here use their real names in order to blur the line between fact and fiction, and thereby suggest that what you're watching is a documentary. However, that pretense is pretty much undermined by the presence Cassidy Gifford in the picture, since it's hard to buy the idea that the daughter of Frank and Kathy Lee Gifford was raised in rural Nebraska. That being said, she does deliver a decent performance as a terrified coed.

Scary fright fare that puts a creepy new spin on the meaning of school spirit.