Film Review: Beyond the Mask 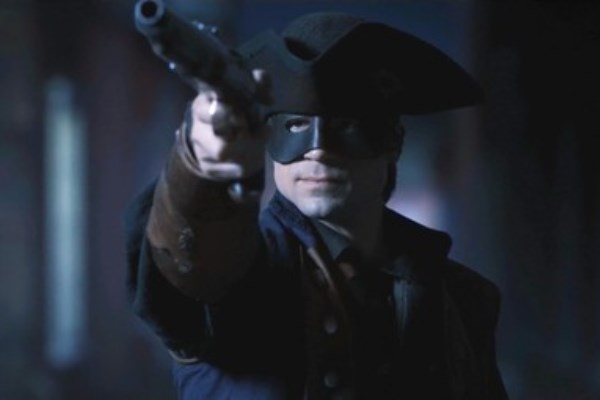 A still from the film 'Beyond the Mask'

Up until 1775, cold-blooded assassin William Reynolds (Andrew Cheney) never had a problem with his job as a hit man for the East India Tea Company. But the veteran mercenary finally developed second thoughts about his grisly line of work after being double-crossed by his diabolical boss, the conniving Charles Kemp (John Rhys-Davies).

So, he ventures to America where he proceeds to impersonate a recently-deceased vicar upon being fished out of a lake by a fetching, eligible lass named Charlotte Holloway (Kara Killmer). It’s love at first sight as soon as their eyes meet, which makes it unfortunate that this faux man-of-the-cloth’s identity is a total fraud.

The plot thickens when Charlotte’s long-lost uncle arrives in the New World, since he also just happens to be the aforementioned Charles Kemp. He not only outs William, but nips the smitten couple’s budding relationship right in the bud.

Before being run out of town, the disgraced suitor apologizes for the lies but vows to prove himself worthy of her love one day. An opportunity for redemption presents itself when William moves to Philadelphia and becomes an apprentice to none other than Benjamin Franklin (Alan Madlane).

For, it is 1776, and Ben, George Washington (John Arden McClure) and the other Founding Fathers are planning to convene the Continental Congress in the City of Brotherly Love that July. Meanwhile, it comes to light that evil Uncle Charles is a British Loyalist with a diametrically-opposed agenda involving disrupting the convention.

Can William foil the plot, get the girl and gain forgiveness from God? That is the proposition posed by Beyond the Mask, a swashbuckling Revolutionary War saga featuring an absorbing mix of romance, derring-do and patriotism served up as a parable of Biblical proportions.

Directed by Chad Burns (Pendragon), this unabashedly Christian production is a faith-based film which avoids heavy-handed moralizing in favor of a subtle style of sermonizing. The sort of action adventure a Born Again Quentin Tarantino might make.

To see a trailer for Beyond the Mask, visit: https://www.youtube.com/watch?v=6pX6Ih7YhQ8