Film Review: The Hand That Feeds 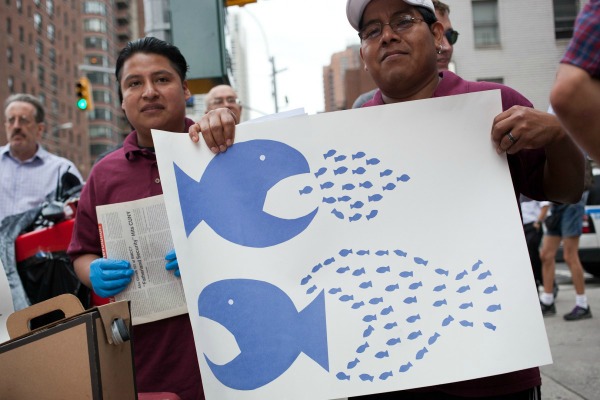 In spite of the existence of a law setting the minimum wage at $7.25 per hour, Manhattan’s Hot & Crusty (H&C) bakery only compensated its Latino staff members a measly $5 per hour. That’s because most were undocumented workers who risked deportation if discovered by the authorities.

The owners of H&C were well aware of their employees’ predicament, so they would routinely threaten to turn in any who dared complain about the ongoing exploitation. Besides being underpaid, the apprehensive immigrants were denied vacation and overtime pay by a sadistic boss who took delight in reminding them how worthless they were. Truth be told, however, their services were critical to the survival of the New York City restaurant in a very competitive industry dependent upon steady access to a source of cheap labor.

This became increasingly apparent to mild-mannered Mahoma Lopez a short order cook working the counter at H&C. Eventually the soft-spoken chef got fed up with his predicament, especially with the lack of basic human dignity he was being afforded.

So, he decided to organize his similarly-situated colleagues, regardless of the risk of arrest. And with the assistance of an employment discrimination attorney as well as veteran activists from the Occupy Movement, they proceeded to picket the place and unionize.

Co-directed by Rachel Lears and Robin Blotnick, The Hand That Feeds is an inspirational documentary chronicling an intrepid band of working-class heroes’ demand that their rights be respected by greedy fat cats who’d rather close down the business than raise salaries to just the minimum wage.

So, guess what the disgruntled strikers did? Before they could be locked out, they defiantly occupied the store and ran it on their own until an equitable settlement could be reached. Ultimately, it reopened under new management willing to sign a fair contract with Mahoma and company.

How do you say Norma Rae in Spanish?

In Spanish and English with subtitles