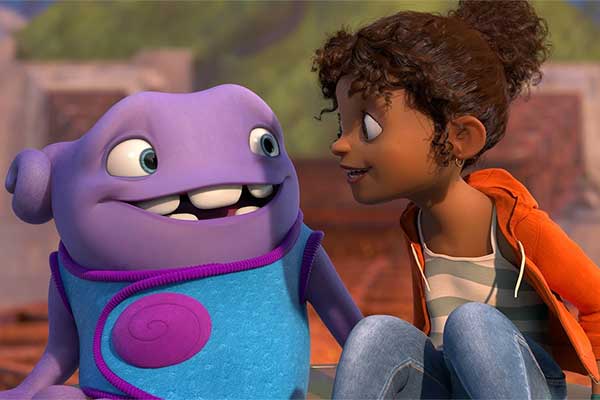 PHOTO: Rihanna and Jim Parsons are the voices of Tip and Oh in the movie Home

Get Hard (R for graphic nudity, drug use and pervasive profanity, sexuality and crude humor) Will Ferrell and Kevin Hart co-star in this class conscious comedy about a millionaire convicted of tax evasion who hires an ex-con to prepare him for life behind bars. With T.I., Craig T. Nelson, Alison Brie and Edwina Findley Dickerson.

Home (PG for mild action and rude humor) Animated adventure about a huggable fugitive from a distant planet (Jim Parsons) who forges an unlikely friendship with an innocent, young Earthling (Rihanna) on a quest of her own. Voice cast includes Steve Martin, Jennifer Lopez and Matt Jones.

Apartment Troubles (Unrated) American Dream dramedy about a couple of Bohemian artist roommates (Jess Weixler and Jennifer Prediger) on the verge of eviction who relocate from Greenwich Village to L.A. to take a shot at fame and fortune. With Megan Mullally, Will Forte, Jeffrey Tambor and Lance Bass.

The Kidnapping of Michel Houellebecq (Unrated) Author Michel Houellebecq plays himself in this crime dramedy revolving around a writer abducted and held for ransom by a hapless gang of inept amateurs. Ensemble cast includes Mathieu Nicourt, Maxime Lefrancois and Francoise Lebrun. (In French and Polish with subtitles)

Man from Reno (Unrated) Neo-noir revolving around a Japanese crime writer (Ayako Fujitani) who becomes embroiled in a real-life murder mystery while vacationing in San Francisco when she impulsively embarks on a love affair with a stranger (Kazuki Kitamura). With Pepe Serna, Yasuyo Shiba and Hiroshi Watanabe. (In English and Japanese to subtitles)

The Salt of the Earth (PG-13 for nudity, mature themes and disturbing images of violence and suffering) Oscar-nominated documentary featuring changes in people and the planet as captured over the past 40 years by peripatetic photographer Sebastiao Salgado. (In French, Portuguese and English with subtitles)

Serena (R for violence and sexuality) Jennifer Lawrence stars in the title role of this costume drama, set in the Twenties, as a Southern belle whose marriage to a North Carolina timber magnate (Bradley Cooper) unravels after she uncovers a big secret about her hubby’s hidden past. With Toby Jones, Rhys Ifans and David Dencik.

While We’re Young (R for profanity) Midlife crisis comedy about a childless married couple in their mid-forties (Ben Stiller and Naomi Watts) whose relationship ends up in crisis after they befriend a much younger couple (Amanda Seyfried and Adam Driver). Cast includes Charles Grodin, Maria Dizzia and Dree Hemingway (Ernest’s great-granddaughter).

White God (R for violence, profanity and bloody images) Man’s best friend drama, set in Hungary, about a devastated 13 year-old’s (Zsofia Psotta) relentless search for her dog after her father (Sandor Zsoter) set the pet free on the streets of Budapest. With Lili Horvath, Lili Monori and Tomas Polgar. (In Hungarian and English with subtitles)