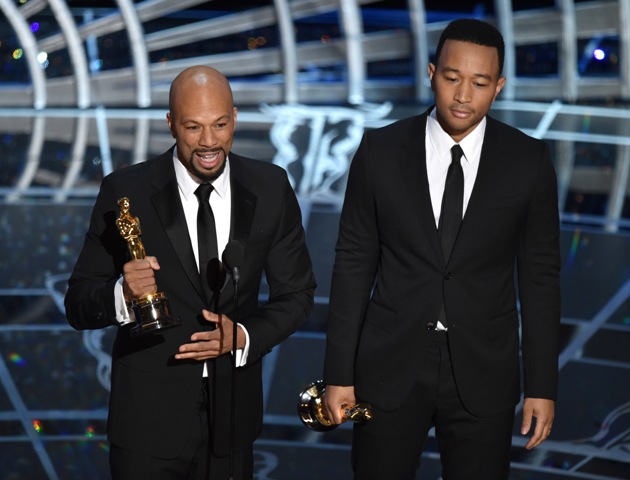 Common, left and John Legend accept the award for best original song in a feature film for “Glory” from “Selma” at the Oscars on Sunday, Feb. 22, 2015, at the Dolby Theatre in Los Angeles. (Photo by John Shearer/Invision/AP)

"Birdman" won Best Picture at the 87th annual Academy Awards on a night periodically punctuated by politically-conscious acceptance speeches. That film and "The Grand Budapest Hotel" tied for the most wins, 4, followed by Whiplash with 3, and Boyhood with 2.

There weren’t any upsets in terms of the major categories, with Julianne Moore (Still Alice) and Eddie Redmayne (The Theory of Everything) prevailing in the lead acting categories, as expected, as well as J.K. Simmons (Whiplash) and Patricia Arquette (Boyhood) in supporting roles.

The evening was emceed by Neil Patrick Harris, who went out of his way to draw attention to the diversity among the celebrities in attendance, but only after joking that “Tonight we honor Hollywood’s best and whitest, I mean brightest.” This was obviously in response to complaints about “Selma” being snubbed and all the acting nominees being white.

Ostensibly to make amends, Neil awkwardly enlisted the assistance of Oprah Winfrey, David Oyelowo and Octavia Spencer to perform as his straight men, even returning to Octavia again and again as the butt of a running joke which unfortunately fell flat every time.

The Academy took a posthumous potshot at the late Joan Rivers, getting the last laugh by leaving her out of the “In Memoriam” montage featuring photos of recently-deceased showbiz legends. The veteran comedienne might not have had much of a career as an actress, but she certainly established herself later in life on the red carpet where she would flourish as a sharp-tongued, fashion critic.

From the very first acceptance speech by J.K. Simmons who suggested people pick up the phone and call their parents and tell them you love them, it seemed that every winner had a political agenda, with causes ranging from suicide prevention (Graham Moore) to equal pay for women (Arquette) to immigration reform (Alejandro González Iñárritu) to Lou Gehrig’s disease (Redmayne) to Alzheimer’s (Moore) to privacy (Citizenfour director Laura Poitras) to the African-American incarceration rate (John Legend).

A galvanizing moment arrived during rapper/actor’s Common’s heartfelt remarks delivered while accepting the award for Best Song, “Glory,” with John Legend. Common eloquently put a universal spin on the legacy of the historic Selma march, stating:

“I’d like to thank God that lives in us all. Recently, John and I got to go to Selma and perform ‘Glory’ on the same bridge that Dr. King and the people of the civil rights movement marched on 50 years ago. This bridge was once a landmark of a divided nation, but now is a symbol for change. The spirit of this bridge transcends race, gender, religion, sexual orientation, and social status. The spirit of this bridge connects the kid from the South side of Chicago, dreaming of a better life to those in France standing up for their freedom of expression to the people in Hong Kong protesting for democracy. This bridge was built on hope, welded with compassion, and elevated by love for all human beings.”

PS: As far this critic’s Oscar predictions, I got 18 of 21 correct, including all the major categories. Not quite the perfect score of a year ago, but pretty impressive nevertheless, if I must say so myself.

Actor: Eddie Redmayne (The Theory of Everything)