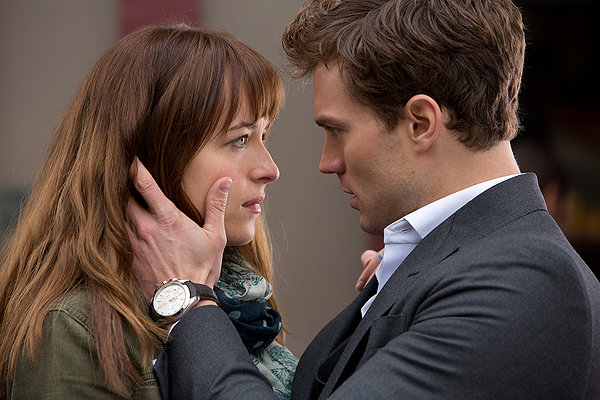 At the point of departure, we meet vestal virgin Anastasia Steele (Dakota Johnson) as she’s about to drive from Vancouver to Seattle to the corporate headquarters of Grey Enterprises to interview CEO Christian Grey (Jamie Dornan) for her college newspaper. The English major’s only been allotted ten minutes with the busy captain of industry slated to deliver the keynote commencement address at her school’s upcoming graduation.

Upon being introduced, obviously intimidated Ana awkwardly asks “To what do you owe your success” and “Are you gay?” before her subject confesses to being a control freak. Turning the tables, Christian proceeds to pose probing personal questions to the nervous journalist, as a palpable sexual tension between the two starts to simmer just beneath the surface.

He reveals his fondness for a particular fetish, however nothing is consummated for a long stretch. Instead, the first half of the film is devoted to a frustrating Kabuki dance where foreplay invariably leads to coitus interruptus.

In lieu of the whips, chains and other staples of bondage debauchery, we’re treated to cautious exchanges during which a whimpering, wide-eyed Ana repeatedly says how scared she is of Christian while he insists she sign a non-disclosure agreement allowing him to torture her. Yes, they eventually do get around to entering his dungeon but, by then, their bland, anticlimactic sessions prove to be a classic case of too little-too late.

A monochromatic misfire featuring only one shade: blushing pink.