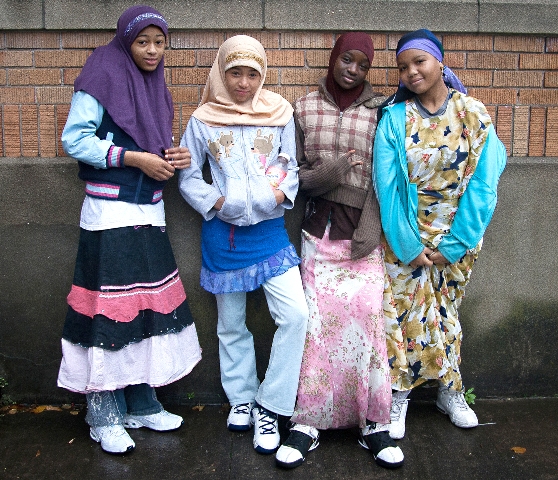 Of The Skanner News
Published: 05 February 2015

Portland Community College's Cascade Festival of African Films celebrates its silver anniversary with a special film made in Portland.
The documentary, "Lessons of Basketball and War," tells the story of  Somali girls from southeast Portland who come together to play basketball in a local recreation league.

The film examines the roots of conflict between Somali ethnic groups and the challenges faced by those who attempt to resolve it here in Portland. The film has been an official selection for the 2014 Global Peace, Richmond International and Red Rock film festivals.
The festival offers 34 films and brings in 10 visiting film directors running Friday, Feb. 6 through Sunday, March 8.

All films are shown in the Moriarty Arts and Humanities Building Auditorium at PCC's Cascade Campus, 705 N. Killingsworth St., with the opening night and the centerpiece film screenings at the Hollywood Theatre, 4122 NE Sandy Blvd. It is free and open to the public.
"The Cascade Festival of African Films is one of the most exciting and treasured educational and cultural events in Portland," said long-time film festival organizer Mary Holmstrom, who is a native of South Africa. "Not only does CFAF enlighten and educate Americans about Africa through films by Africans, but it also provides Portland-area African immigrants and refugees with the opportunity to be represented and understood when their respective cultures are brought to life on the big screen."
This year, the Cascade Festival of African Films offers a Retrospective Series of the festival's top-10 films through its 25-year history on each Sunday of the schedule. In addition, there will be a Student Fest for high school and college-age students, and a Family Fest featuring films for children. Women Filmmakers Week will welcome four female directors to PCC for panel discussions about their films.
Attending will be Ron Bourke, local Portland writer, director and producer, who made "Lessons of Basketball and War." After reading an article in The Oregonian newspaper about a Somali girl's basketball team put together by then Hosford Middle School Principal Kevin Bacon, the idea to make the documentary was born.
Bourke said "Lessons of Basketball and War" explores universal issues of violence, prejudice, cultural identity and conflict resolution as seen through the eyes of the girls, who are refugees from war and famine in Somalia. The film shows how the team, mostly Muslim, dealt with the sexualized, celebrity-obsessed America and the issues of the ethnic animosity that followed them to America from Somalia.

This documentary follows a year in their lives and those of the educators and volunteers who helped them. The film will be shown at 2 p.m., Saturday, Feb. 28 as part of the festival's Student Fest Matinee at the Moriarty Auditorium, Cascade Campus.

2015 Film Festival Highlights
* Opening Night - Screening of "Half of a Yellow Sun" at 6 p.m. and 9 p.m., Friday, Feb. 6, at the Hollywood Theatre. Based on the award-winning novel by Chimamanda Ngozi Adichie, the film balances deep personal drama against a broad canvas of national upheaval. Beginning with Nigeria's independence in 1960, the film centers on twin sisters from a prominent Lagos family who make very different life choices. The film's showing is followed by a discussion with director Biyi Bandele.
* Sunday Retrospective Series - Every Sunday afternoon, film organizers showcase the top-10 films from the past 25 years of the Cascade Festival of African Films at the Moriarty Auditorium.
* Women Filmmakers Week - Thursday, March 5 through Saturday, March 7 at the Moriarty Arts & Humanities Auditorium, Cascade Campus. Shorts, feature films and panel discussions with visiting directors highlight talents of female filmmakers.
* Family Fest Matinee - It is hosted by Baba Wagué Diakité of Mali and features the film "Felix" at 11 a.m., Saturday, Feb. 28, at the Moriarty Auditorium. Film centers on 13-year-old Felix's dreams of becoming a saxophonist like his late father, but his mother thinks jazz is the devil's music. When Felix is awarded a scholarship for grade eight at an elitist private school, he defies his mother and turns to two aging members of his father's old band to help him prepare for the school jazz concert.
For a complete schedule and rundown of films, visit: http://www.africanfilmfestival.org/