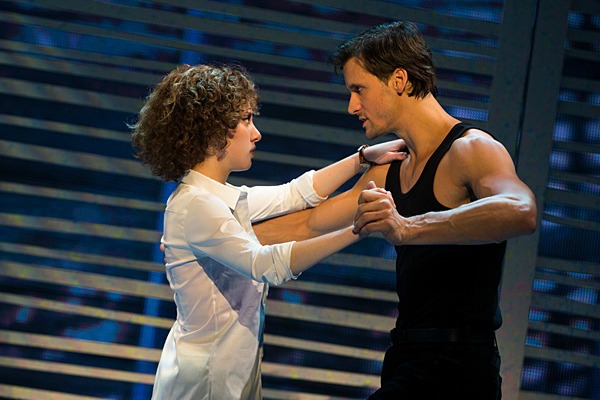 Dirty Dancing – The Classic Story on Stage opens at the Keller Auditorium on Jan. 13. Written by Eleanor Bergstein and directed by James Powell, Dirty Dancing tells the tale of Frances “Baby” Houseman and Johnny Castle who fall in love across class boundaries during a tumultuous summer in 1963.

Jerome Harmann-Hardeman plays Tito Suarez, the band leader at the Catskill Mountain resort where Baby and Johnny meet. The Skanner News interviewed Jerome about his career, his character and the timeless appeal of Dirty Dancing.

The Skanner News: Did you always see yourself in the performing arts?

Jerome Harmann-Hardeman: No. I went to school for bio-chemistry and I got turned to the arts. I hadn't been exposed to it prior to that. I didn't have any earlier experiences with it really. I was fascinated by it; I was fascinated by acting and singing, just stagecraft in general.

TSN: How did you get into Musical Theater?

JHH: I got introduced by a girl I was dating, she was a communications major and she would occasionally need me to help her with projects she was doing. She was an upper classman and I was a lowly freshman. So I would help her out.

I just found it so interesting how alive and in the moment, even though there was a lot of history to learn and there were things that I didn't know. I wasn't approaching it at that point from the perspective of a professional or someone who would be pursuing it as a professional. Even so, it was still really, really interesting and very challenging.

The way I did things seemed a little out-of-order, or wooden, or not spontaneous. People who were actually studying acting were a lot more connected to what they were doing.  I couldn't figure out how to do that, so I started taking some classes, so I could be better at it.

TSN: Your website lists your acting, dancing, and voice-over work; which type of work do you enjoy the most?

JHH: At this point, all three. I still love the theater and I really, really love doing voice-overs, I like doing audiobooks probably the most. Audiobooks or audio-magazines and commercials.

The audiobooks allow you to act a little bit, to act out many characters. I just think that audio digital work is really important for people who either can't see or who would rather hear it or for people who travel a lot and love to listen to books like I do. And I find that a lot of times kids will like hearing the history book rather than reading it.

TSN: You definitely sound like you are having a lot of fun with your digital voice over work.

JHH: Yeah. I have tried to write a few things myself that were basically geared towards elementary and high school kids. I think it’s fascinating because of the technology now, it's accepted, it's so much easier to reach a lot of people. I don't know exactly what I want to do with it but I see in the future doing something with education.

TSN: Tell me about Tito Suarez, your character in Dirty Dancing?

JHH: Ellen, who wrote the movie and also wrote the musical, she explained the Tito character a little bit. He is supposedly Max Kellerman's best friend, he started working for Max when Max started to open Kellerman's, he's been the pianist/conductor for the last 30 years and occasionally, you see him in the play speaking to Johnny and Neil, Max's grandson.

He is an integral part of Kellerman's, not really to the Johnny and Baby story per se, but to the general story of the resort itself. The director, James Powell, has said "When anyone comes to you, you give them advice in a kind of fatherly way," and that is essentially who the character is, he's a lot of fun.

We sing standards in the beginning of the show, and then it moves them to rhythm and blues and rock 'n roll, and soul music and so I get to do that, I get to go from “There Will Never be Another You” to “Love Man.”

TSN: Dirty Dancing, the movie, is so iconic - what are the challenges and advantages of bringing it to the stage?

JHH: The story itself is actually kind of deep. You know, because Penny gets pregnant that is what propels Baby, who is trying to help out in some way to start to learn to dance with Johnny. She's going to take Penny's place while Penny goes through this abortion with the travelling doctor, in '63. At that time, abortion was illegal. The guy comes through, he's not really a doctor, he screws it up and her father has to step in.

You have that story, which actually is so amazingly relevant today. Another thing is that Eleanor Bergstein, who wrote it, she wrote this from her experience. She stayed in resorts like this when she was a kid and she believes that these experiences on some level still happen to young people. They go some place and all of the sudden their world is completely changed by one or two events. Not in a minor way, change in a major way, they open their eyes, they see the world in an entirely different way, they begin to understand how the world works. There won't always be someone there to protect you - that you have to take responsibility for what you do with your own actions.

That translates very well and I think people back in the ‘80s, they went to see it for the music and for the dancing and for the memories. And the young people who go see it, they'll say "oh, that's interesting, because I went through something like that." The young people who are watching it are talking about the story; the older people are the ones who are talking about the music.

TSN: That is an interesting point; different people are going get different experiences from the piece

JHH: I feel that there are also people in the audience who distinctly remember the ‘50s and the ‘60s. The beginning of the play takes place the day before the March on Washington, Eleanor wanted that section in the movie, but they cut it, they didn't think it was relevant.

These are the small parts that might give a different twist to the play. We have a small section where everybody is in their cabins listening to the "I Have a Dream" speech and then there is campfire later on where Max talks about how some of the boys are going to go down and be freedom riders and then they leave. And Neil comes to me and says "I've decided I am going to go be a freedom rider" and I said "You should think about this, it's worse than you think it is, it's not all fun and games, people are really  getting hurt."

It puts a different perspective on things, because, like anything, the story not only looks at the incident, but what was happening around the incident, the economics, the religion, all of those things. There is a whole backlog of history that can be interesting if you are exposed to it.

For more information and to purchase tickets, go to www.portland.broadway.com