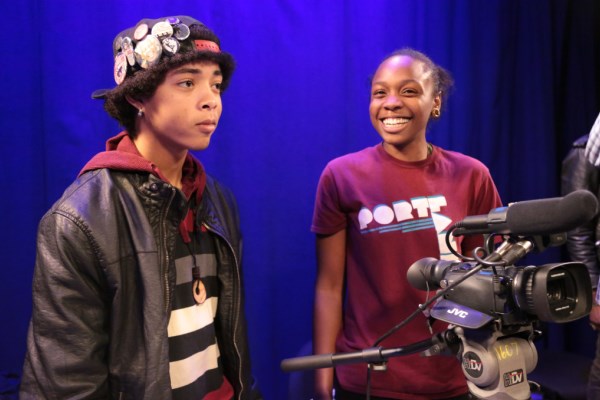 It has become the Portland story to see sleepy neighborhood streets turn into chic destinations. Old houses get demolished and sleek apartments replace them. Vacant lots turn into food-cart hot-spots. Property values rise as do rents.

For the artists, entrepreneurs and filmmakers at the De-Gentrifying Portland event, gentrification tells a different tale. Know Your City, Portland African American Leadership Forum and project coordinator Sharita Towne have brought together youth of color to make short films on the effects of gentrification.

Images of train yards melt into visions of light rail. Barbershops and corner markets shutter their doors and give rise to boutiques, bistros and cafes. New people flock to the neighborhood, as if it were born anew, unaware of its storied history.

The films ranged from raw to refined, with every submission providing insight on loss, eviction, privilege, entitlement, community and history.

‘White Lady Diaries’ was a quirky point-of-view exploration of privilege as she went about her daily tasks of brushing her teeth, shopping and walking down the street. Text flashed an internal dialog about living a harassment-free life where she could see herself reflected in the culture around her.

Historian O.B. Hill contributed to a film which tracked the African American diaspora in Portland from the flood of Vanport through the I-5 transportation corridor up to the present day shift toward East Portland.

The schism between the people moving into neighborhoods and the people who are being pushed out of the neighborhoods was never more apparent than in an interview with a middle-aged woman who had just purchased a house in the Alberta neighborhood.

When asked to define “gentrification,” she replied that “It sounds like generations coming together.” She went on to talk about the great melting pot of cultures and how excited she was to be a part of it.

When asked about the history of the neighborhood, she could only point to age of her house as evidence she was invested in history.

Other new residents of Alberta and Williams Avenue fared little better as they ingratiated themselves over discovering and fostering culture where “there was nothing before.”

The films showcased the shadow side of Portland hipster culture where inclusive, organic and  unpretentious become buzz words that ring hollow for the evicted, disbanded and detached former neighbors.

In the film “Clarity” a long-time northeast resident spoke of his own experience of Portland as “a city that calls itself diverse that excludes people of color.”

The next De-Gentrify Portland event will be Dec. 13 at Sons of Haiti Lodge from 2-4 pm.