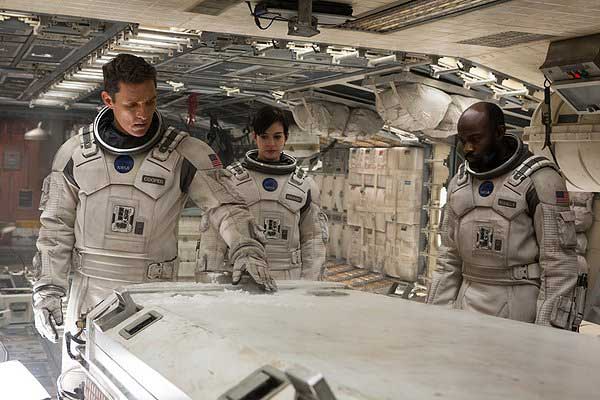 PHOTO: A still from the movie, Interstellar

The Theory of Everything (PG-13 for suggestive material and mature themes) Bittersweet biopic focused on the relationship of physicist Stephen Hawking (Eddie Redmayne) and wife Jane Wilde (Felicity Jones), the friend of his sister (Charlotte Hope) he met while they were students at Cambridge in the Sixties. With Emily Watson, Charlie Cox and Simon McBurney.

Bhopal: A Prayer for Rain (Unrated) 30th anniversary retrospective revisiting the Union Carbide industrial accident in India which claimed over 10,000 lives in just a few hours. (In English and Hindi with subtitles)

Death Metal Angola (R for profanity) Musical documentary about the heavy metal scene in war-ravaged Angola, the richest country in Africa in terms of natural resources.

Elsa & Fred (PG-13 for brief profanity) Shirley Maclaine and Christopher Plummer co-star in the title roles of this remake of the 2005 Argentine romantic comedy about a widower who gets a new lease on life when he falls in love with a free-spirited septuagenarian. Cast includes Marcia Gay Harden, Chris Noth, George Segal and James Brolin.

Jessabelle (PG-13 for terror and violence) Sarah Snook portrays the title character in this haunted house flick about a young woman who returns to Louisiana to recuperate in her family’s waterfront mansion after a car accident, only to come face-to-face with a demonic spirit that’s been awaiting her return. With Mark Webber, Joelle Carter and Amber Stevens.

On Any Sunday: The Next Chapter (PG for crashes, peril and mild epithets) International motorcycle racing is the subject of this documentary inspired by another on the same sport released in 1971.

Open Windows (Unrated) Stalker thriller about a frustrated fan (Elijah Wood) who starts monitoring an actress’ (Sasha Grey) every move over the internet after she refuses to honor a dinner date won in a contest. With Neil Maskell, Nacho Vigalondo and Ivan Gonzalez. (In English and Spanish with subtitles)

Sex Ed (Unrated) Haley Joel Osment stars in this romantic comedy as a health teacher in an inner city school who finds himself falling in love with the older sister (Lorenza Izzo) of one of his students (Kevin Hernandez). With Retta Sirleaf, Laura Harring, Abby Elliott and George Eads.

Virunga (Unrated) Endangered species documentary chronicling conservationists’ efforts to save the last of the gorillas in the midst of a civil war over the Congo’s natural resources. (In English, French and Swahili with subtitles)

The Way He Looks (Unrated) Homoerotic romance drama about a blind teenager (Ghilherme Lobo) who develops unexpected feelings for the new kid in town (Fabio Audi). With Tess Amorim, Julio Machado and Selma Egrei. (In Portuguese with subtitles)