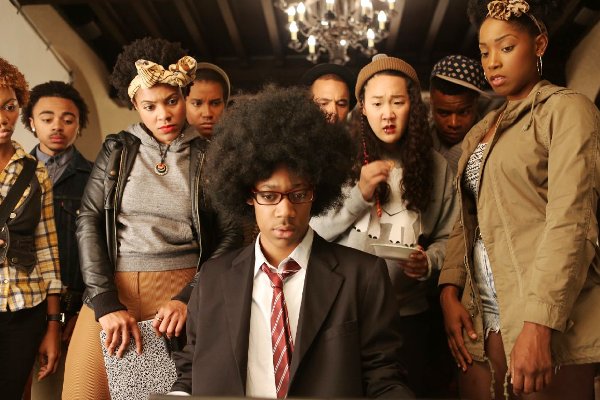 The academics are tough enough at Winchester University, a mythical Ivy League institution. It’s too bad that black students there also have to worry about making themselves comfortable socially.

That’s precisely the predicament we find a quartet of African-American undergrads facing at the point of departure of Dear White People, a sophisticated social satire marking the directorial and scriptwriting debut of Justin Simien. Earlier this year, the thought-provoking dramedy won the Jury Award for Breakthrough Talent at the Sundance Film Festival.

The picture’s protagonists are as different from each other as night and day. Lionel Higgins (Tyler James Williams) is gay and uncomfortable around his own people because blacks teased him the most about his sexuality back in high school. So, he lives in a predominately-white dorm where he’s ended up being bullied anyway.

Political activist Samantha White (Tessa Thompson) sits at the other extreme, being a militant sister who lives in the all-black dorm ostensibly serving as a refuge for the “hopelessly Afro-centric.” She also hosts a talk show on the college’s radio school’s station, “Dear White People” where she indicts Caucasians about everything from their racism to their sense of entitlement.

Finally, we have Coco Conners (Teyonah Parris) who just wants to assimilate into mainstream American culture. In fact, she’s more concerned with whether she might make the cut for the reality-TV show conducting auditions on campus than with challenging the status quo, ala rabble rouser Samantha.

So, the premise is set by establishing that the four lead characters have little in common besides their skin color. And the plot subsequently thickens when Pastiche, a student-run humor publication, decides to throw a Halloween party with an “unleash your inner-Negro” theme.

Now they share the prospect of being stereotyped by white classmates cavorting around in blackface dressed as pimps and gangstas, and as icons like President Obama and Aunt Jemima. En route to a surprising resolution, director Simien pulls a couple of rabbits out of his hat while lacing his dialogue with pithy lines (“Learn to modulate your blackness up or down depending on the crowd and what you want from them.”) and touching on a litany of hot button issues ranging from Affirmative Action to Tyler Perry.

A delightful dissection of the Ivy League that stirs the pot in the way most folks mean when they a call for a national discussion of race.

Rated R for profanity, ethnic and sexual preference slurs, sexuality and drug use