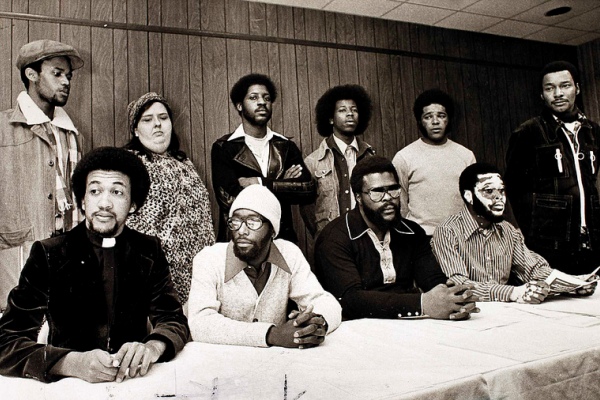 Special to the NNPA from The Wilmington Journal
Published: 22 September 2014

Photograph of The Wilmington Ten courtesy of the News and Observer of Raleigh, NC.

The much acclaimed feature-length film, “Pardons of Innocence: The Wilmington Ten,” will have its national debut during the CBCF Annual Legislative Conference this Friday, Sept. 26 at the Renaissance Hotel across from the Walter E. Washington Convention Center in downtown Washington, D.C.

Produced by the National Newspaper Publishers Association and CashWorks HD Productions, the 119-minute documentary recounts the turbulent history surrounding the troubled desegregation of New Hanover County Public schools in North Carolina during the late 1960s through 1971, and the violent incidents, reminiscent of what we saw in Ferguson, Mo. this summer, that led up to the false prosecution of eight Black male students, a White female community organizer, and fiery civil rights activist, Rev. Benjamin Chavis, for protesting racial injustice.

The case of the Wilmington Ten made national and international headlines, resulting in the Congressional Black Caucus, speaking out for justice.

Featured exclusive interviews in the film include Gov. Beverly Perdue, who tells how powerful people across the state of North Carolina tried to stop her from granting pardons of innocence to the Wilmington Ten; Joseph McNeil, Wilmington, N.C. native and member of the legendary Greensboro Four, who tells why Black students had to stand up for freedom and against racism during the 1960s and 70s; Benjamin F. Chavis, Jr., NNPA interim president and leader of the Wilmington Ten, who relives the events that led up to that racially violent week in Wilmington in February 1971; Rev. Jeremiah Wright, pastor emeritus of Trinity United Church of Christ in Chicago, recalling how he and other clergy from the United Church of Christ came to Raleigh in 1977 and met with then Gov. James Hunt to implore him to pardon the Wilmington Ten, only to be rejected.

The film, to be screened as part of the NNPA’s 2014 Leadership Conference in Washington this week, will be shown at 4 p.m. Friday, Sept. 26 at the Renaissance Hotel, 999 Ninth Street N.W.

The film will be followed immediately by a panel discussion on issues impacting the African-American community, tentatively featuring members of the Congressional Black Caucus. Admission is free and open to the public.