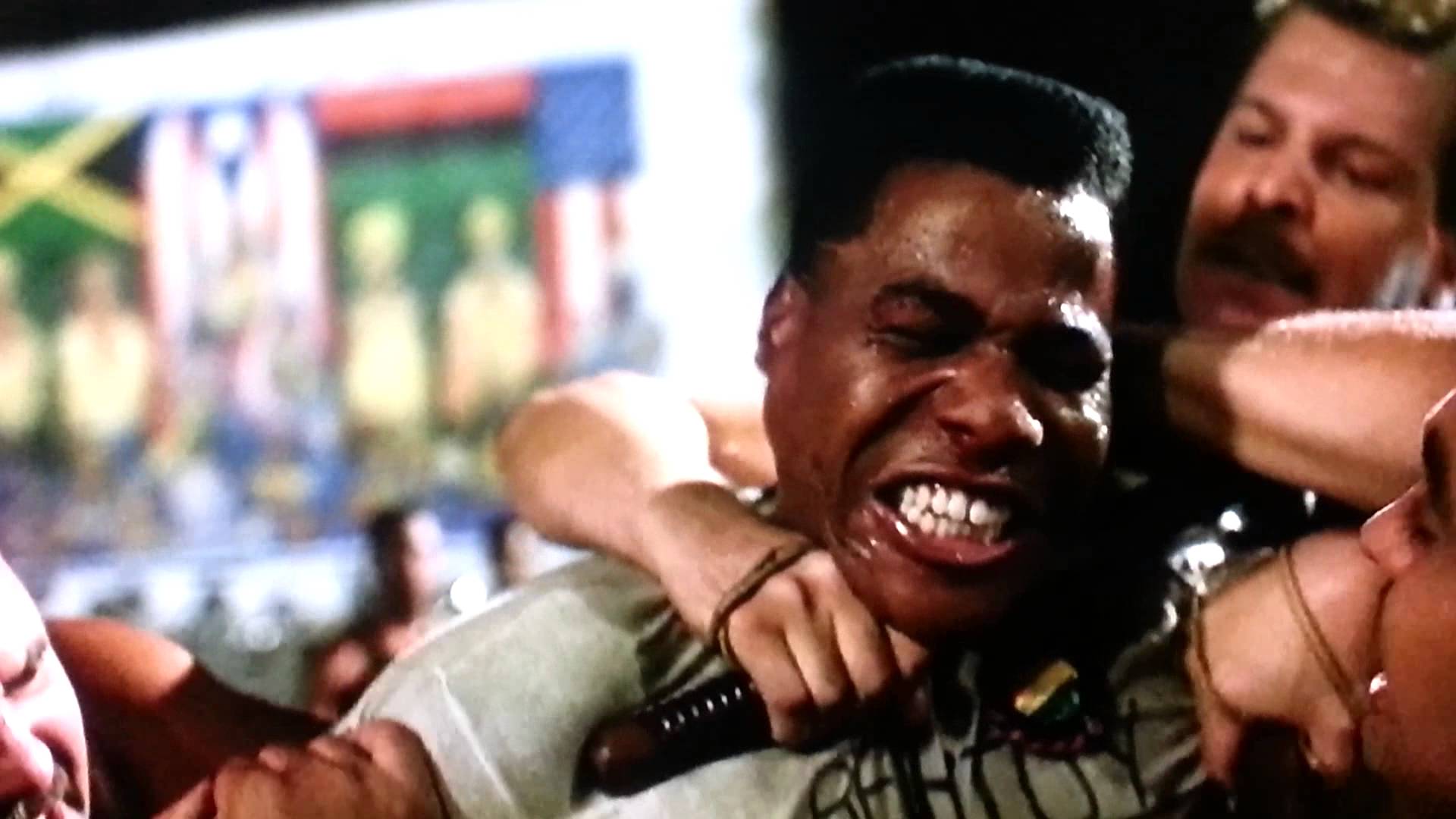 Modern audiences won’t be able to escape the similarities between Radio Raheem’s death scene, at left, and cellphone video taken of Eric Garner’s fatal choking by New York City police on July 19 just after Garner and his friend Ramsay Orta – who recorded the scene -- chatted about where they should go for dinner. Raheem is played by actor Bill Nunn.

Events in Ferguson, Mo., have moved local communities around the country to re-examine violence, race and police accountability in the context of our neighborhoods.

In that spirit the Hollywood Theatre this month offers Spike Lee’s classic film, “Do the Right Thing,” followed by a panel discussion on race featuring author, filmmaker and scholar David Walker with writer and comedian Sean Jordan, hosted by Jason Lamb.

Lee’s film rocked the nation 25 years ago with its frank yet compassionate portrayal of racial conflict among friends, neighbors and coworkers – all made worse by a looming police presence – that explodes into violence after the chokehold killing of Radio Raheem, a “gentle giant,” by New York police on a city sidewalk.

Modern audiences won’t be able to escape the similarities between Raheem’s death scene and cellphone video taken of Eric Garner’s fatal choking by New York City police on July 19 just after Garner and his friend Ramsay Orta – who recorded the scene -- chatted about where they should go for dinner.

The Skanner News spoke with Walker about the film and why it still resonates today.

The Skanner News: What made you decide to screen “Do the Right Thing” – right now?

David Walker: The screening is the brainchild of local podcaster Jason Lamb, with the input of Dan Halsted, who programs the Hollywood Theater. I got recruited to be part of the post-screening discussion, I'm assuming, because I've got a big mouth.

Jason came up with the idea of a series of screenings followed by a discussion on how race is perceived within the context of each film. “Do The Right Thing” seemed like a good idea, in part because this year is the twenty-fifth anniversary, but also because it has always spoken to the divide in racial perception and reality in this country.

TSN: “Do the Right Thing” is widely considered to be one of the greatest American films of all time. What is it that makes it still so provocative even after 25 years?

Walker: Sadly, the film is still relevant today because nothing has really changed. Gentrification has gotten worse. Racial relations have not improved. Police brutality still continues, and as a nation, we still argue over when it is okay for the police to kill an unarmed black man. I remember coming out of the theater 25 years ago after seeing “Do the Right Thing,” and overhearing arguments over which was worse, the burning of Sal's Pizzeria, or the murder of Radio Raheem. I'm still hearing similar conversations. Only now we hear, "He was wearing a hoodie, and may have had a criminal record."

TSN: Do you feel the Ferguson killings/riots have changed the country? Why or why not?

Walker: The events we've seen in Ferguson last month show that nothing has really changed. I mean come on - at least the LAPD didn't kill Rodney King. There is this portion of America that wants this country to be post racial -- whatever that means -- or doesn't want to really discuss race or racism, because it is too difficult. It's like going to the doctor, and being told that you’re morbidly obese, when you don't even think you're overweight. It's living in denial, because facing the truth is too difficult.

Ferguson is race and racism in America, exposed for what is really going on. Will it change anything? I don't think so. There's an ever-growing list of names, victims of police brutality and the systemic oppression of black people, and nothing changes. Today our outrage is over Michael Brown or Eric Garner, before that it was Trayvon Martin. We keep having new names to give our rage a sense of purpose, but so far it hasn't made a difference. Sorry if that sounds too cynical.

TSN: Speaking as a journalist and film reviewer – not to mention a novelist – can you talk about how it is that sometimes a piece of fiction can have so much truth in it?

Walker: On a very personal level, I'm an angry person. I've studied history. I've lived history. I've banged my head against the walls of systemic oppression, and tried to point it out to people.

For me, as a creative person, I use my frustration and anger as a means to deliver a message in a way that isn't as confrontational as walking up to people and screaming, "You're a racist idiot," while burning down buildings.

Instead, I can create stories that address the issues that plague me, in a way that hopefully evokes an emotional and intellectual response in others. There is truth in fiction because it comes from the imagination that is fueled by reality. Sherman Alexie's book, “The Absolutely True Diary of a Part-Time Indian” is a work of fiction that is so true, and so painful, and so funny, and it comes from his imagination, which was fed by his experiences.

TSN: What is happening at your film event?

Walker: We're still working out the details, but there will be a post-screening conversation between myself, and some others. We may open it up to a crowd discussion. I'm not sure. I definitely would love for people to come and enjoy the movie, and then have a healthy conversation about what it means to do the right thing. It will be like the summer of 1989 all over again.

The most important thing to keep in mind is that this is not a political type of event. This is about people getting together to watch a great film, and then talk about our perceptions of humanity. If activists want to come, that's great. If lovers of cinema want to come, that's equally great.

We can all take about how film and popular culture work to shape our ideologies, and what we can do to shift our thinking. Or we can all get up and dance like Rosie Perez.

For more on David Walker’s work, go to www.badazzmofo.com. Find out more about the Hollywood Theatre or to get tickets to the show, go to www.hollywoodtheatre.org .