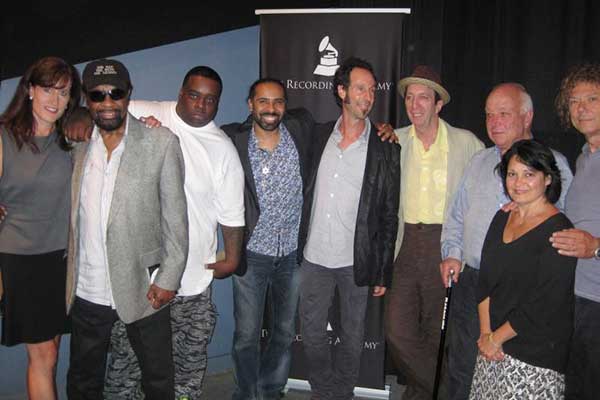 PHOTO: Take Me To The River cast and crew members.

No Good Deed (PG-13 for violence and profanity) Crime thriller about a charming stranger (Idris Elba) who terrorizes a stay-at-home mom (Taraji P. Henson) and her kids after gaining entry to their home by claiming to have car trouble. With Kate del Castillo, Leslie Bibb and Henri Simmons.

Search Party (R for drug use, sexuality, graphic nudity and pervasive profanity) Road comedy about two buddies’ (T.J. Miller and Adam Pally) who come to the rescue of a just-dumped groom-to-be (Thomas Middleditch) left naked in the middle of the Mexican desert. Featuring J.B. Smoove, Lance Reddick and Alison Brie.

108 Stitches (R for profanity and sexual references) Ensemble comedy about a lousy college baseball team that schemes to go out on a high note after learning that the school president (Kate Vernon) plans to disband the program at the end of the season. Cast includes Bruce Davison, Erin Cahill and retired major leaguer Roger Clemens.

Archaeology of a Woman (Unrated) Justice delayed drama about a daughter (Victoria Clark) who unexpectedly uncovers clues to a long-unsolved crime of passion while caring for her mother (Sally Kirkland) suffering from Alzheimer’s. With James Murtaugh, Karl Geary and Mary Testa.

Bird People (Unrated) Romance drama about a jaded, Silicon Valley engineer (Josh Charles) who quits his job and breaks up with his wife while in Paris on business in order to pursue a passionate affair with his young hotel maid (Anais Demoustier). With Roschdy Zem, Camelia Jordana and Geoffrey Cantor. (In French, English and Japanese)

The Disappearance of Eleanor Rigby: Them (Unrated) Final installment of the simultaneous trilogy, set in NYC, revolving around the trials and tribulations of a young couple (James McAvoy and Jessica Chastain) struggling to save their marriage in the wake of a tragedy. Ensemble includes Viola Davis, William Hurt, Isabelle Huppert and Bill Hader.

The Drop (R for graphic violence and pervasive profanity) Screen adaptation of Animal Rescue, the Dennis Lahane short story about a lonely bartender (Tom Hardy) who launders cash for local mobsters only to become the focus of the police investigation in the wake of a robbery gone wrong. With Noomi Rapace, John Ortiz and the late James Gandolfini.

Faith Connections (Unrated) Spiritual documentary chronicling events unfolding at the Kumbh Mela, the triennial pilgrimage undertaken by 100 million worshippers to Allahabad, India to worship while sharing a bath in a sacred river. (In Hindi with subtitles)

The Green Prince (PG-13 for mature themes and disturbing images) West Bank documentary about Palestinian informant Mosab Hassan Yousef, the son of a founder of Hamas who converted to Christianity and became a spy for Israel after being arrested as a teenager for throwing rocks at soldiers. (In Hebrew and English with subtitles)

I Am Eleven (Unrated) ‘Tweener documentary offering a look at life from the unique perspectives of a variety of 11 year-olds from Australia, Asia, Europe, North America and the Middle East.

Pirates (Unrated) Seafaring adventure, set at the dawn of the Joseon Dynasty, about a race between a bandit (Nam-gil Kim) and a pirate (Ye-jin Son) to retrieve the royal stamp swallowed by a great gray whale while en route to Korea from China. With Hae-jin Yoo, Tae-woo Kim and Dal-hwan Jo. (In Korean with subtitles)

The Skeleton Twins (R for profanity, sexuality and drug use) Dysfunctional family drama about long-estranged fraternal twins (Kristen Wiig and Bill Hader) who are inspired to repair their damaged relationship after cheating death on the same day in separate incidents. With Luke Wilson, Ty Burrell and Boyd Holbrook.

Take Me to the River (PG for smoking, mild epithets and mature themes) R&B retrospective revisiting the influence of Memphis and the Mississippi Delta on soul music. Featuring appearances by Snoop Dogg, Bobby Blue Bland and Booker T. Jones.