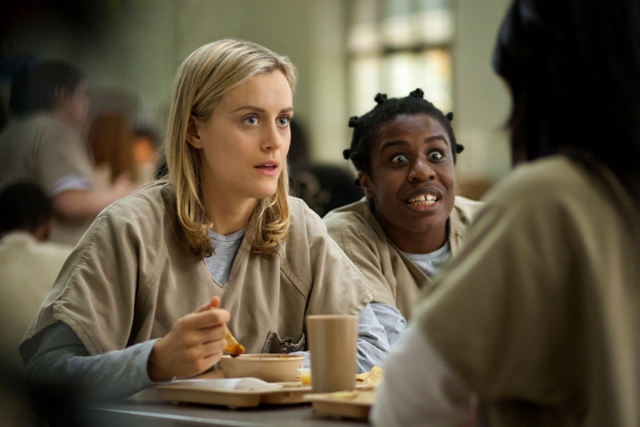 This image released by Netflix shows Taylor Schilling, left, and Uzo Aduba in a scene from "Orange Is the New Black." At the Emmy Awards being held Monday, Aug. 25, 2014, in Los Angeles, the prison-set dark comedy “Orange Is the New Black” and political drama “House of Cards” could become the first online series to claim top series awards. (AP Photo/Netflix, Paul Schiraldi, File)

LOS ANGELES (AP) — Like baseball, the Emmy Awards are a game of statistics: Long-running shows are able to pile up TV's top awards and new records year after year.

The 66th prime-time Emmys, airing at 8 p.m. EDT Monday on NBC with host Seth Meyers, are full of such possibilities, including a fifth best comedy series trophy for "Modern Family" that would tie it with all-time sitcom champ "Frasier."

There's also a chance for new stats this time around, the result of changes in how programs are delivered and watched.

Among other potential history-making wins:

— If "The Big Bang Theory" star Jim Parsons is crowned as best comedy actor, it will be his fourth Emmy and put him in league with Kelsey Grammer and Michael J. Fox.

— A victory for "Breaking Bad" star Bryan Cranston would give him a tie with four-time best drama actor champ Dennis Franz.

— Matthew McConaughey, nominated for the drama series "True Detective," will join an exclusive club if he wins, according to awards historian Tom O'Neil, joining Helen Mirren, Helen Hunt, Liza Minnelli and George C. Scott as the fifth actor to win both an Emmy and Oscar in a single year. In March, McConaughey nabbed the best actor Academy Award for "Dallas Buyers Club."

— "Scandal" star Kerry Washington would be in a class by herself if she receives the best drama series actress award, becoming the first African-American to conquer the category.

Although the Emmys are about celebrating the best of TV, they also include an "in memoriam" tribute to industry members who died in the past year. Among those who will be remembered: Robin Williams, with Billy Crystal honoring his longtime friend and fellow comedian and actor.