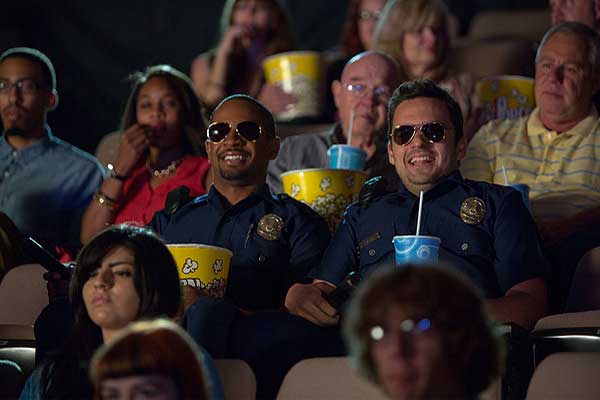 Damon Wayans, Jr. is a member of the famed Wayans family, creators of the groundbreaking television series In Living Color, the Scary Movie franchise, and much more. Damon made his film debut in Blankman, a superhero comedy that starred his father. He also appeared in his dad’s television series My Wife and Kids before striking out on his own as a stand-up comic on Def Comedy Jam.

Damon subsequently made such movies as Dance Flick, Marmaduke, Someone Marry Barry, and The Other Guys. More recently, he has starred on the TV sitcoms Happy Endings and New Girl. Here, he talks about his new film, Let’s Be Cops, where he co-stars opposite Jake Johnson, a fellow cast member on New Girl.

KW: Thanks for the time, bro. What interested you in Let’s Be Cops?
DW: I guess it was the concept which was similar to a buddy cop comedy, except they’re not cops. So, it’s sort of a fresh take on the idea. I was actually a little curious about why it hadn’t been done before, but I was definitely interested, especially once I heard that Jake Johnson was in the mix. We get along really well and make each other laugh a lot. So, I was like, “If you do it, I’ll do it.” And that’s how we got involved in the project.

KW: Attorney Bernadette Beekman asks: Did you do your own stunts and dancing? Did you shadow a real cop to prepare for the role?
DW: I did not shadow a real cop to prepare for the role because in the movie we‘re pretending to pretend to be cops. Basically, any mistakes that I would make as an ordinary citizen were encouraged. So, I never needed to shadow a cop to try to look like a cop. And yes, I did most of my own stunts, and when it came time for the dance moves I even did my own back flip. But when it came to really dangerous stunts, like breaking the glass table with my back when the lady throws me, that wasn’t me, but a stuntman named Reggie.

KW: Kate Newell says: It's great seeing you on New Girl. Is there much improv happening on the set?
DW: They allow it, yeah. After they get their takes in, they kinda allow us to do anything we want. It’s fun working in that environment with people I like. I went to high school with Zooey [Deschanel]. We know each other really well.

KW: Talking about TV shows, I recently read that In Living Color might be coming back to TV.
DW: Really? That’s cool to hear if it’s true. I know that they tried to revive it a year or so ago, but it didn’t really pan out.

KW: Harriet Pakula-Teweles says: You have experience on both the big and small screen. Which might be a better fit for your performance style?
DW: I don’t really know. That depends on how Let’s Be Cops does at the box office. If it tanks, I guess TV is better for me. [LOL] I feel like I can do both. I think of the small screen as my 9-to-5 job and of the big screen as projects that you fit in between.

KW: Harriet also asks: With so many classic films being redone, is there a remake you'd like to star in?
DW: Weekend at Bernie’s.

KW: How hard is it hailing from such a talented and famous family?
DW: It’s not really hard. They’ve encouraged me the whole way, since we see a win for any one of us as a win for all. So, if I’m doing good work, and they approve of it, I’m happy.

KW: Your dad has a reputation for being a bit of a disciplinarian. Is that rumor true or false?
DW: It’s true. He was definitely a disciplinarian, when we were growing up. It was almost as if he went off to play Major Payne in the movie, and stayed in character after he got back. He would make us do sit-ups, push-ups and jumping jacks every morning when we woke up. If we got anything below a B grade, he would shave our heads and make us wear a suit to school. He’s a pretty intense guy. [Chuckles]

KW: You wouldn’t believe how many people I’ve interviewed over the years have told me they broke into show business with the help of one of the Wayans.
DW: That’s awesome. I guess the Wayans gave me my first break, too.

KW: Editor/Legist Patricia Turnier asks: Which scene in Let’s Be Cops was the most fun to shoot?
DW: [Laughs] It’s hard to pick just one. The ones with Jake, Rob Riggle and Nina Dobrev were all fun. And Keegan-Michael Key from Key and Peele was hilarious. I’d say any scene that made me laugh or break character in the middle of it. I just had a blast the whole way through.

KW: Patricia is also wondering what teacher or mentor played an important role in your professional path?
DW: My two greatest influences were my dad, and my martial arts teacher, Mark Mikita.

KW: Finally, Patricia says: You’ve written scripts for TV. Are you interested in writing for the big screen?
DW: Absolutely! One of my dreams is to be able to what the big boys, the Seth Rogens and the Jonah Hills as able to do, get my own projects greenlit, shot and do well at the box office like. That’s kind of my ultimate goal.

KW: Is there any question no one ever asks you, that you wish someone would?
DW: [LOL] No, I don’t think so.

KW: The Teri Emerson question: When was the last time you had a good laugh?
DW: About five minutes ago.

KW: What is your guiltiest pleasure?
DW: That reality-TV show Diners, Drive-Ins and Dives. I always want to eat that food whenever I watch it.

KW: The bookworm Troy Johnson question: What was the last book you read?
DW: I read a lot of books. The last one was “Gone Girl,” http://www.powells.com/biblio/1-9780307588371-10 a novel by Gillian Flynn.
That’s a really good book which has just been made into a movie by David Fincher. It’s coming out in October and stars Ben Affleck. And I’m reading the “The Bourne Retribution” right now. http://www.powells.com/biblio/9781455550944

KW: The music maven Heather Covington question: What was the last song you listened to?
DW: “Summer,” by Calvin Harris. I hear it everywhere.

KW: What is your favorite dish to cook?
DW: Here’s the thing, dude. I can’t really cook, but I make a mean Top Ramen. [Laughs]

KW: The Sanaa Lathan question: What excites you?
DW: Danger! I like to do daring things. I’ve bungee jumped three times. The only thing I haven’t tried is skydiving.

KW: The Uduak Oduok question: Who is your favorite clothes designer?
DW: I’m not really a clothes guy. I’d rather be naked.

KW: When you look in the mirror, what do you see?
DW: My dad. [Chuckles] and I see a guy who’s pretty happy.

KW: If you could have one wish instantly granted, what would that be for?
DW: The power to fly, for sure.

KW: Let's say you’re throwing your dream dinner party—who’s invited… and what would you serve?
DW: I’d serve corn chowder bisque, and Jake [Johnson] would not be invited because he’s standing here bombing my interview. [To Jake] You’re not invited. I’d invite Dave Chappelle, Louis C.K, and all these people who make me laugh. I would sit at the head of the table and say, “Make me laugh or get out of my house.”

KW: The Ling-Ju Yen question: What is your earliest childhood memory?
DW: My Uncles Shawn and Marlon bursting into the bathroom while I was pooping, throwing me off the toilet, and laughing at my turds. That really happened. They used to torture me. [Laughs]

KW: The Melissa Harris-Perry question: How did your first big heartbreak impact who you are as a person?
DW: I don’t think I’ve ever had my heart broken, because I’m a man. I laughed it off, and then went and had sex with about 16 women, all unprotected. [Chuckles]

KW: The Kerry Washington question: If you were an animal, what animal would you be?
DW: A dolphin.

KW: The Viola Davis question: What’s the biggest difference between who you are at home as opposed to the person we see on the red carpet?
DW: I smile and laugh a lot more when I’m at home.

KW: The Anthony Anderson question: If you could have a superpower, which one would you choose?
DW: The ability to make people’s heart stop, if I just point at them.

KW: The Judyth Piazza question: What key quality do you say all successful people share?
DW: Drive, and belief in themselves.

KW: The Flex Alexander question: How do you get through the tough times?
DW: By crying a lot. [LOL]

KW: “Realtor to the Stars” Jimmy Bayan’s question: What is the dream locale where you’d like you live?
DW: Hawaii.

KW: What advice do you have for anyone who wants to follow in your footsteps?
DW: If you have the ability and want it bad enough, do it!

KW: Thanks again for the time, Damon, best of luck with Let’s Be Cops, and I look forward to speaking with you again soon.
DW: Awesome, Kam, thanks!