Serendipity Players Present Crumbs From the Table of Joy 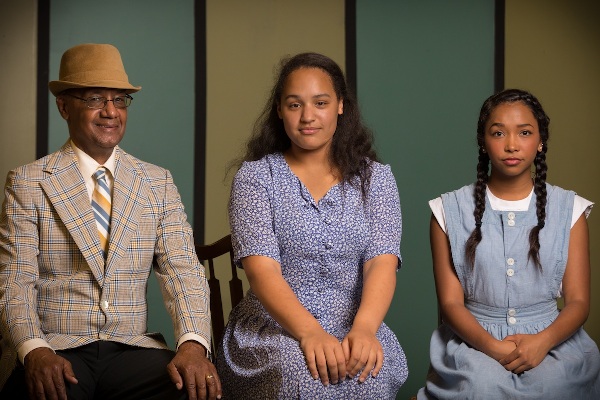 The Serendipity Players will present “Crumbs From the Table of Joy,” by Pulitzer Prize winning playwright  Lynn Nottage.

The show is a drama in two acts featuring Clark College students Elena Mack and Kiara Gaulding, as well as local actors Phillip Bowles, Kate Lacey, and Dee Harris. The show is directed by Serendipity Players Artistic Director Tony Broom.
“I think Lynn Nottage is one of the best playwrights working today,” Broom says. “She has a real knack for exploring serious subjects with humor and humanity. It’s really an honor to get to produce her work.”

In 1950, Jackie Robinson was playing for the Brooklyn Dodgers, having broken the “color barrier” in 1947. In 1948, President Truman issued an executive order desegregating the military. Malcolm X becomes a minister of the Nation of Islam in 1952. In 1951, an African American minister, Father Divine, calls for reparations to be paid to the descendants of slaves. In Washington DC, the term “McCarthyism” is born. And in 1950, Godfrey moves his two daughters, Ernestine and Ermina, to Brooklyn, having heard the call of Father Divine’s church.
“Crumbs From the Table of Joy” takes the perspective of Ernestine, who is seventeen years old. This is a complicated year in her life. Her father, Godfrey, has moved the family from the south to Brooklyn, where she and her sister, Ermina are having trouble fitting in. Her aunt has recently re-entered their lives, causing trouble whenever she appears. Then there’s the matter of her new German step-mother.

Serendipity Players will also be collaborating with Clark College and iUrban Teen to bring Serendipity Teen Theater Camp to the Decker Theater for this play. For more information about the theater camp, please contact Rebekah Sauvolah at 360-713-1168.
The production runs at 8 p.m. on Aug. 15, 16, 22, 23, with Sunday matinee performances at 2 p.m. on Aug. 17, 24. Sunday matinees are “Pay What You Will” performances.

All performances take place at The Decker Theater at Clark College, 1933 Ft. Vancouver Way, Vancouver.
Tickets for evening performances are $15, and are available at crumbs.brownpapertickets.com. Tickets may also be purchased at the door 30 minutes prior to the performance. Sunday matinees are all Pay What You Will for this play, and you may purchase these tickets both online and at the door as well now. Reservations can be made at 360-834-3588.