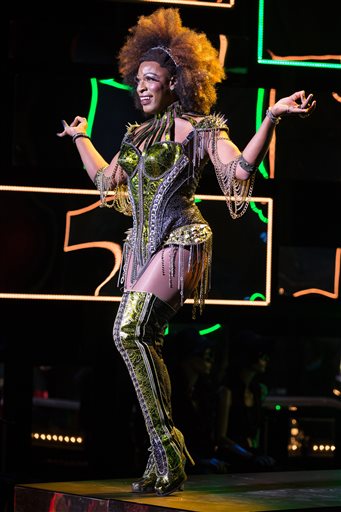 This photo from the O+M Company shows Kyle Taylor Parker during a performance of the musical, "Kinky Boots." Parker will star in the first national tour of "Kinky Boots," kicking off in Las Vegas on Sept. 4. (AP Photo/The O+M Co., Matthew Murphy)

Kyle Taylor Parker is going from backup dancer to leading man — but staying in 6-inch heels.

The performer who has been in "Kinky Boots" since it made its debut in Chicago in 2012 will step into Billy Porter's formidable high heels as the star of the first national tour of "Kinky Boots," which kicks off in Las Vegas on Sept. 4.

"It's been this slow and wonderful journey toward taking over the role," Parker said. "For me, taking it on for the tour is not just a very happy occurrence. It's really an honor on many levels."

The Tony Award-winning musical is based on a 2005 British film about a staid British shoe factory on the brink of ruin that retrofits itself into a maker of footwear for drag queens. It has songs by Cyndi Lauper, a story by Harvey Fierstein and some fierce-looking drag queens. Now it leaves the cocoon of Broadway to travel America's heart.

Parker has been part of the show's ensemble of six drag queens called Angels since it began and also became an understudy for Lola, played by Tony Award-winner Porter. Now he'll spend months living out of a suitcase, something the former veteran of the national "In the Heights" tour says he loves.

Parker knew he wanted to be on Broadway by the time the curtain fell on his first ever Broadway show. It was 1997. He was 5. The show was "Annie" at the Martin Beck Theatre.

"I don't know if it was seeing those kids on a Broadway stage or just falling in love with the story, but I looked at my mom and I said, 'I want to do that,'" he recalled.

He did exactly that. Parker graduated from the American Musical and Dramatic Academy in New York and was thrilled when "Kinky Boots" rode into Broadway's Al Hirschfeld Theatre. It was Parker's Broadway debut and it was at a familiar place: The Al Hirschfeld Theatre was the new name of the Martin Beck Theatre — the same place he saw "Annie" all those years ago.

Parker will leave the show this week and begin working on the tour. He still seems a little stunned that he gets to take what he's learned from Porter, mix it with his own skills and share it with America.

"Billy has really been such a wonderful mentor to me as a performer. I grew up listening to everything that he's sung and watching his perform in Broadway shows," he said. "He is the performer who actually let me know that there's a place for me on Broadway."