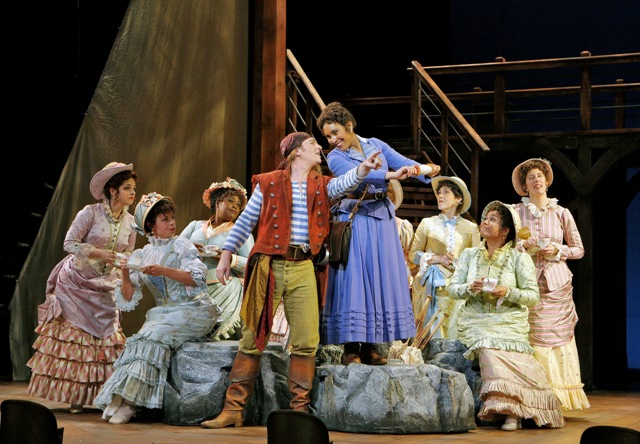 The Portland Opera’s new production of “The Pirates of Penzance” is grabbing attention for a lot of reasons – its updated musical stylings, the skill of its singers who are already getting raves for their acting skills, and especially the hilarity of the comic operetta’s story about a young pirate coming of age.

But for many observers the juiciest thing is that two African American artists from Northeast Portland – mezzo soprano Shalanda Sims and baritone Emmanuel Joseph Henreid -- are in the cast, joining a multi-racial production of the 1879 comedy by Arthur Sullivan and W.S. Gilbert.

Sims has spent years directing local kids in annual shows at Jefferson High School – her alma mater -- from acting to music and more. Each year her students perform a Black History month show; most recently the performance was about the lost community of Vanport.

She says the rush of finding her name in the opera playbill is exhilarating every time she sees it – and she never doubted it was possible.

“I received an e-mail that they were casting; they were looking for someone to sing gospel music,” Sims says. “And so I came in for an audition.”

Sims was so good, her name is in the program – she plays one of the Major-General’s daughters, Isabel.

She says that, from her opera experience, she is bringing back to her young students the lessons of discipline and practice.

“When I was coming up, we weren't able to afford the classes and training that a lot of the other theater kids had,” she says.

“So that has been my goal, to have something for the young people who want to get some training, but they don't have the resources to be on stage.”

Sims voice resonates when she talks about her experience so far.

Henreid’s story is reminiscent of novels by Mitchel S. Jackson and Heidi Durrow – except for its absolutely happy ending.

Before his family moved him away from the Alberta Street area’s gang life when he was a small boy in the mid-1990s to a safer neighborhood in Gresham, Henreid says he spent a lot of time indoors.

“One summer there were six murders,” he says. “I think that was the summer that I always watched OPB, and one day I stumbled upon an opera.

“I knew that a lot of kids have their own superheroes, and they knew of Superman and Batman – but once I witnessed opera, for me that was it. That was my superhero moment.

“And I said to myself at the age of seven, that's what I want to do.”

Henreid learned that wasn’t so easy though; he says his voice was so bad people urged him to shut up. But he didn’t listen to them.

“I would practice in the bathroom for hours and hours, and my mother would just be praying on the other side of the wall, Lord please let him be able to sing one day,” he says.

Finally, after years of study and practice, Henreid in his junior year of high school was named the top young baritone in the state of Oregon.

He graduated from high school in Gresham and attended ConcordiaUniversity.

Today he sings, in addition to the opera, with a gospel ensemble called Kingdom Sound, often heard at the Highland Christian Center in East Portland.