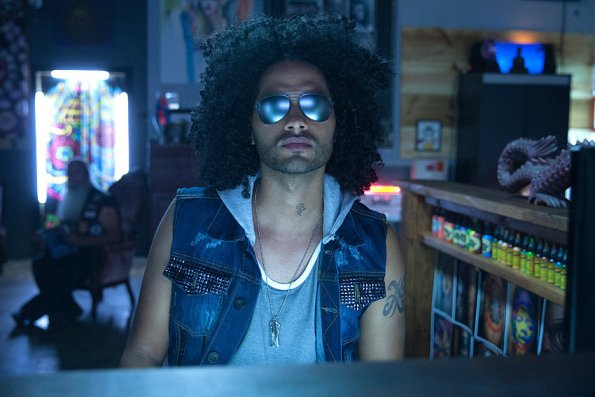 Allyson Field (Sarah Drew) really can’t complain. After all, her life is the epitome of the American Dream. She has a handsome husband who adores her and is an excellent provider, too. She has a beautiful home in suburbia and her own minivan for shopping and shuttling around their hyperactive children, Beck (Zion Spargo), Bailey (Shiloh Nelson) and Brandon (Michael Leone).

Yet, she’s still overwhelmed by her domestic duties sometimes, especially when Sean’s (Sean Astin) work takes him out of town. Consider Mother’s Day, for example, which Ally recently spent cleaning up messes rather than being pampered like a princess.

Not alone in feeling frazzled, Ally hatches a plan with her BFFs, Sondra (Patricia Heaton) and Izzy (Andrea Logan White) to treat themselves to an evening of bowling and fine dining in a fancy restaurant next Saturday, assuming that their hubbies can babysit for a few hours without incident. That erroneous assumption jumpstarts the comedy of errors which ensues soon after Sean and the other hapless spouses (Alex Kendrick and Robert Amaya) do their best to fill-in.

Yet, when a baby turns-up missing, guess who’s recruited to join the frantic search party. With the help of a buff biker with a heart of gold (Trace Adkins) and an impatient cabbie (David Hunt) with a British accent, the girls put their getaway on hold as their maternal instincts kick-in.

Co-directed by Jon and Andrew Erwin, Moms’ Night Out is a wholesome, PG-rated comedy that’s actually fun for the whole family. It’s also a faith-based film, though not heavy handed, ostensibly-designed with the Christian Evangelical community in mind.

By the madcap misadventure’s happy resolution, sanity and safety are satisfactorily restored. More importantly, the wives are no longer taken for granted, but elevated to the lofty status envisioned by William Ross Wallace in the appreciative refrain “The hand that rocks the cradle is the hand that rules the world.”

A timely testament to motherhood that just might make the perfect Mother’s Day gift.