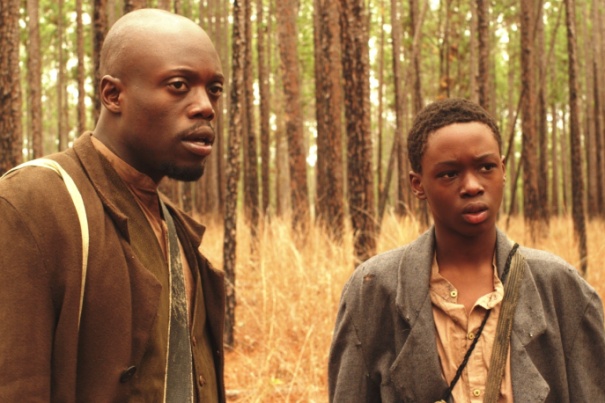 It is 1864, and the bloody conflict between the Union and the Confederacy is raging. Against the ominous backdrop of battle and cannon fire in the distance, we are introduced to Will (Ashton Sanders), a 13 year-old orphan ostensibly wrapped up in his own struggle to survive near the front lines.

Separated at birth from the mother he’s never known, the vulnerable black boy is trying to save enough money to track down his long-lost dad. He works as the assistant to Burrell (Bill Oberst, Jr.), a bounty hunter in the fugitive slave business. Will does the white Southerner’s bidding by first ingratiating himself with unsuspecting escapees, and then betraying them once they confess to being runaways.

Today, we find him on a mission in search of an ex-slave named Nate (Tishuan Scott). Will gains his confidence by offering to escort him back below the Mason-Dixon Line for a deathbed visit with a dying brother.

That establishes the absorbing premise of The Retrieval, a riveting road saga with escalating tension. Will Nate catch on before he’s turned over to Burrell? Or might the kid have second thoughts about striking a bargain with the devil?

Written and directed by Chris Eska, The Retrieval made a splash on the festival circuit including at South by Southwest last year where Tishuan Scott won the Special jury Prize in the Breakthrough Performance category. Besides being blessed with great acting, this atmospheric mood piece features eerie cinematography that manages to transport you back to the Civil War era more convincingly than either 12 Years a Slave or Django Unchained.

Slavery revisited as a sick institution making for strange bedfellows.