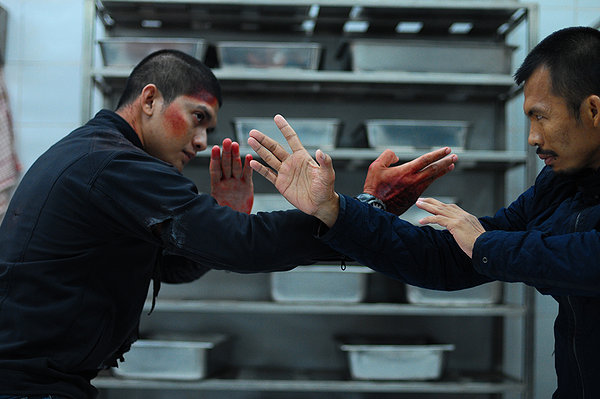 Sabotage (R for sexuality, nudity, drug use, gory violence and pervasive profanity) Action thriller starring Arnold Schwarzenegger as the commander of an elite DEA task force which finds itself being taken down one-by-one by a ruthless drug cartel.  With Sam Worthington, Terrence Howard, Olivia Williams and Harold Perrineau.

Breathe In (R for profanity) Home-wrecker drama about a beautiful, British exchange student (Felicity Jones) whose arrival in the States proves problematic when she brings the head (Guy Pearce) of her host family to the brink of breaking his marriage vows. Cast includes Ben Shenkman, Amy Ryan and Kyle MacLachlan.

Finding Vivian Maier (Unrated) Shutterbug retrospective showcasing the 100,000+ photos shot on the streets of Chicago by an unassuming nanny (1926-2009) who never even developed most of her negatives. Featuring Phil Donahue, Mary Ellen Mark and John Maloof.

Jews of Egypt (Unrated) Middle East documentary retracing the 1956 exodus from Egypt of Jews due to escalating tensions in the region generated by the Arab-Israeli conflict. (In Arabic and French with subtitles)

Locker 13 (R for violence) Supernatural thriller revolving around the overnight janitor (Jason Spisak) at an Old West theme park who finds himself facing a life or death decision after delving into the mysteries surrounding his locker. With Tatyana Ali, Ricky Schroder and Curtis Armstrong.

Nothing without You (Unrated) Crime thriller about a psychiatric patient (Emily Fradenburgh), accused of murder, who enlists the assistance of her court-appointed shrink (Keith McGill) to prove her innocence. Featuring Joshua Loren, Will Crawford and Kate Bringardner.

Refuge (Unrated) Dysfunctional family drama about a youngster (Krysten Ritter) who does her best to care for herself and her siblings after they’re all abandoned by their parents. Co-starring Brian Geraghty, Logan Huffman and Julie Garrett.

Road to the Open (PG for mild epithets and mature themes) Buddy dramedy about a guy (Phillip DeVona) who tries to help his reclusive best friend (Troy McKay) out of a rut by entering the two of them as a doubles team in a national tennis tournament. Support Cast includes Michelle Gunn, Eric Roberts, Judd Nelson and John Schneider.