Brown, Black and Blue all Over: The Story of Lyndee Mah 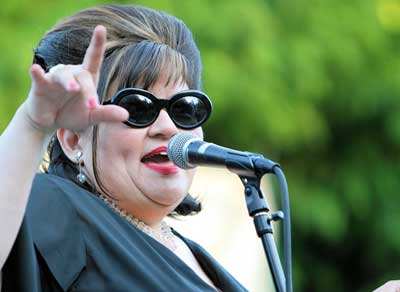 It’s lucky because, artists try and try to tell us something these other specialists cannot. An artist’s work is producing us something simple, simple like joy or like longing. Artists are likewise tasked with getting us to the core of ugliness, like hating and like warring – essentially human stuff that doctors and engineers are not so good at handling.

An artist’s product, unlike an MD’s prescription or an engineer’s solution, is not concrete. World Affairs Council’s program director and Portland’s late-night jazz drummer Tim DuRoche insists that “Art is not the What, of what we do.”  It’s “the How” of you or me getting a grip on our human situation, right here on our wobbly little planet. What we do to fix all that, happens later.

So when local performing artist Lyndee Mah takes her turn on stage beginning April 10, her audiences will see and hear her very best shot at diagnosing that most destructive disability of our shared 240-year American experience:  Our American race-thing.

Mah is an established musical voice in the River City art scene, teaching local vocal artists, co-founding and lead-singing for Pink Martini, touring with Quarter Flash, jazzing with Ron Steen and Janice Scroggins. Credentials like an internist’s medical association certificate or a civil engineer’s license, each hung high on an office wall.

Resume aside, Lyndee Mah’s Sanctuary Theater performances owe their actual authority to Ms. Mah’s ethno-cultural complexity. Her authenticity flows from her Chinese and her Welsh heritage; from her son’s and his African American elders and ancestors. And of course, from each of those robust ethnic stream’s intersections with America’s mainstream.

Here’s the story: Mah’s mother’s family sailed to the US during a surge of one of the 1700’s mass migrations from the UK’s crop failures. Steamers packed with optimistic emigres, each with a one-way ticket. It is a twisted trail that ultimately sets up Lyndee’s beginnings in Idaho Falls.

Like all laboring migrants – the kind alternatingly welcomed and expelled by our country – Lyndee’s dad comes with all kinds of difficult discontinuities, including his suddenly motherless kids. Lyndee’s mom was what we would now call a social worker, with the Salvation Army, last century’s stand-up supporter of urban family welfare. She was moved to help him, and his.

Hazel Delores Welch and Phillip Lip Gee Mah, Lyndee’s Welsh American mom and her Chinese laborer dad settle in Idaho Falls, run downtown’s Chinese Restaurant, and make babies. Back then, the US Supreme Court had not yet declared state anti-misegination laws (no marrying outside your race statutes) unconstitutional. And even after it had, Idahoans took a while longer getting used to it. That is, getting used to Mr. and Mrs. Mah, and of course getting used to kids like Lyndee.

And from there forward, as Mah would have it, it’s all music. And history.

E`-Bon E`-Bon is all of this, the sorrow and the joy, the braiding of an ambitious immigrant nation’s many-many narratives. Mah’s performance is indeed – as promised by jazz drummer Tim DuRoche’s proposition – “the How part.”  How do we find meaning and momentum in America’s shocking violence as well as in our awe-inspiring creativity.

“The “What part:” What to do about our beautiful chaos?  Will have to come to us, like it comes to Lyndee Mah. “Performance,” she says, “is my reassurance.”

E`-Bon E`-Bon runs for four days, April 10-13. That’s five performances about one mixed-blood woman’s search, and by implication one energetic society’s search, for identity, for legitimacy, and for legacy.  Ms. Mah will tell it via visual and video imagery, interwoven with musical stylings and improvised performance art. Some of the latter, she characterizes as “border-line stand-up comedy.” There’s lots of irony and word gags at play here.

Most ironic, so ironic that Lyndee Mah needs a long moment to lay it out for you, is how E`-Bon E`-Bon plays at The Sanctuary, the cathedral-like historic site of Portland’s Salavation Army, the kind corps where her personal story starts. It’s How things work. It’s How we are.

Performance and ticket information at http://e-bon.lyndeemah.org