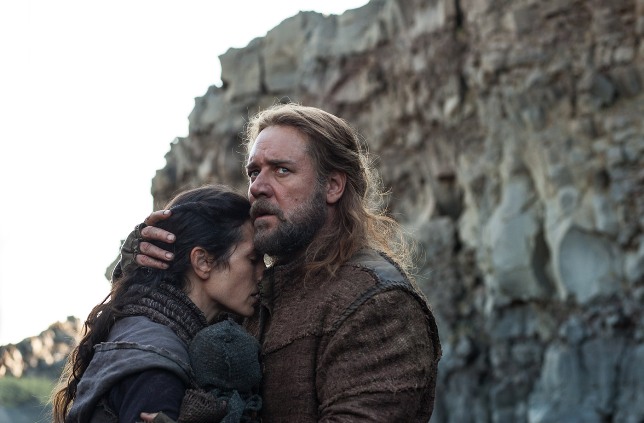 Anybody with even a rudimentary knowledge of the Bible is undoubtedly familiar with the story of Noah and the Ark. That scriptural passage, found in Genesis, revolves around a righteous patriarch recruited by God to build a big boat before the arrival of a flood being meted out as divine punishment for man’s many wicked ways.

Heeding the word of the Lord, he proceeded to construct the mammoth vessel before herding two of each species of animal into the hold. It subsequently rained for 40 days and 40 nights, with water covering the entire Earth’s surface, thereby drowning all of humanity except for his family.

So, until now, the tale of Noah was basically a simple one about God’s decision to completely wipe the planet of sinners and start over. Leave it to Oscar-nominated director Darren Aronofsky (for Black Swan) to come up with a novel and intriguing reinterpretation of the popular parable recasting Noah as a complicated soul wrestling with inner demons during his quest to do the Lord’s bidding ahead of the impending deluge.

The movie also has an ecological angle, plus some computer-generated monsters ostensibly designed to holds the kids’ interest.

The film stars Academy Award-winner Russell Crowe (for Gladiator) in the title role, and features a talented supporting cast which includes fellow Oscar-winners Jennifer Connelly (for A Beautiful Mind) and Anthony Hopkins (for The Silence of the Lambs), three-time nominee Nick Nolte (for Warrior, Affliction and The Prince of Tides), as well as Emma Watson and Ray Winstone.

The picture opens with what is essentially a Sunday school lesson, a refresher course about the creation of Adam (Adam Griffith) and Eve (Ariane Rinehart) who begat three sons: Cain, Abel and Seth. The evil one, Cain, slew his sibling Abel, and those descending from Cain’s demon seed continued to do the devil’s work by generally exploiting the planet’s natural resources.

Noah, by contrast, as a son of Seth, learned how to live in harmony with nature. He and his wife (Connelly) raised their sons, Shem (Douglas Booth), Japheth (Leo McHugh Carroll) and Ham (Logan Lerman), with the same eco-friendly philosophy. Eventually, of course, Noah gets his marching orders from God, and the plot thickens when the steady drizzle develops into a neverending downpour.

Suddenly, his nosy neighbors no longer see constructing an ark as such a nutty idea anymore, and it’s going to take a miracle like an army of animatronic angels to keep the desperate hordes from climbing aboard.

Meanwhile, a visibly-anguished Noah agonizes over what’s about to transpire, and consults his sage, berry-imbibing grandfather, Methuselah (Hopkins). But anticipatory survivor’s guilt ain’t about to alter God’s plan one iota. An alternately introspective and breathtaking Biblical epic, every bit cerebral as it is panoramic!