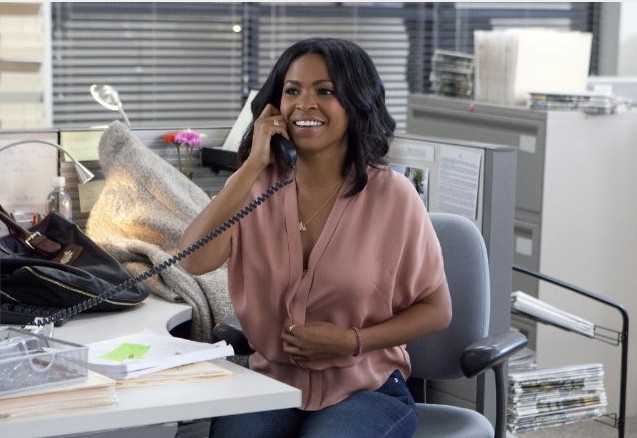 Nia made her film debut in Boyz n The Hood, a poignant picture portraying social problems in inner-city Los Angeles. She subsequently starred in Friday opposite Ice Cube and Chris Tucker, as well as Love Jones, which won the prestigious Audience Award at Sundance. Nia’s notable film roles also include Soul Food, Alfie, The Best Man, Are We There Yet?, Big Momma’s House 1 and 2, Stigmata, The Broken Hearts Club and Made In America.

Nia’s portrayal of Officer Sasha Monroe on the hit crime drama “Third Watch” netted her a couple of NAACP Image Awards for Outstanding Actress in a Drama series. Her other TV accomplishments include “The Fresh Prince of Bel-Air,” “Boston Legal,” “Judging Amy,” and “Big Shots.”

In addition to her film and television work, Nia’s passion lies in serving her community. With her family roots firmly planted in Trinidad, Long’s long term goals are to connect women in the US to those of the island and to mentor young girls to regain their self-esteem.

Additionally, she lends her support to Black Girls Rock, an organization that promotes the arts for young women of color and encourages dialogue on the ways women of color are portrayed in the media. And in 2012, she was named an official surrogate to the Barack Obama reelection campaign.

Nia loves to cook fresh, farmer’s market meals with a twist of her Trinidadian heritage. When she’s not juggling between her career and motherhood, she enjoys staying active by doing Pilates, boxing, hiking, and horseback riding.

She also takes pleasure in traveling and experiencing different cultures throughout the world. One of her favorite locations to visit is Jamaica, a place she calls her second home where she can reflect and refuel.

Here, Nia talks about co-starring as May in The Single Moms Club opposite her son Massai, as well as Amy Smart, Zulay Henao, Tyler Perry, Terry Crews, Wendi McLendon-Covey and Cocoa Brown.

Kam Williams: Hi Nia, thanks so much for the time.

Nia Long: Of course, Kam. How are you?

KW: What interested you in The Single Moms Club?

NL: The title alone. I think it’s a world we haven’t explored on film. And I feel that single mommies don’t get enough praise and accolades. I’ve had first-hand experience. My mother was a single mom. As far as I’m concerned, mommies, in general, rule the world. And single mothers just take it to a whole other level.

KW: I don’t how many that makes. I’ve lost count. Besides this one, which of your Essence covers is your favorite? The August 2012 issue with your sons?

NL: Honestly, it’s so hard, because each Essence cover represents a different special moment in my life. So, I can’t really judge them. It’s hard to judge yourself, too. But I do love the one with my boys. That was probably the closest one to me myself. This one is about keeping it sexy in my 40s, so I’m not mad about that either.

KW: Editor/Legist Patricia Turnier asks: How was it having your son, Massai, play your son, and what acting advice did you give him?

NL: I actually sent him to my acting coach, Betty Bridges.

NL: Yes. She worked with him for several days. And then, my own mom recorded him on her iPhone. It was one of those situations where I didn’t want to be a part of process, because I felt it was important for him to go through the process and earn it. So, we sent the video over to Tyler. When we didn’t hear back after a couple of days, I was like, “Omigosh! What if he doesn’t get this job? How am I going to break the news to him?“ Fortunately, Tyler thought he was great and he did get the job. At the end of the day, I was really happy with the outcome of the scenes. Working opposite him was such a gift, and something I’ll have on film forever. I don’t know whether a star was born, but I’m sure it was an experience that can only help benefit his development as a young man.

KW: Director Rel Dowdell says: In the movie there's a poignant scene where your character, May, has the chance to say disparaging things about her son's father to her son, but doesn't. Did that scene have any special resonance with you, since your real-life son was playing your son?

NL: Well, my son’s dad is committed, and involved, and amazing. We’re actually really good friends. But I think it’s dangerous to speak negatively to the child about your ex or the absent parent, because, believe it or not, they learn very quickly who the other parent is. And it’s important that they develop their own attitudes and opinions about that other parent based on their experiences, not based on what someone has said about them. Fortunately, there’s mostly more positive than negative. When there isn’t, that’s just the way life happens. You just don’t want your child to ever feel like they have less of an opportunity to succeed based on the circumstances in which they were born. I try to be optimistic about everything. There are no victims in my home.

KW: Harriet Pakula-Teweles asks: What would you say is the overall message of The Single Moms Club?

NL: Try to find fellowship… And try to find sisterhood… And try to find that village that can help you support your journey and your kids and your experiences. Never lose a sense of yourself throughout the process, and still pursue your dreams as a mom. Listen, when all is said and done, don’t be afraid to get out there and date, and have a little bit of fun. We’re still women… we’re still feminine… and we still have needs.

KW: Patricia says: You have been in the entertainment industry for decades. I’ve followed your career since Boyz n the Hood. What is the secret to your longevity?

NL: Probably my last name. [Chuckles] No, I feel it’s that I don’t ever give up on myself, and I’d rather run a marathon than a sprint. Personally, I think I’m a slow learner who’s getting better every year, every moment, every project. I’ve met so many amazing people along the way. And there’s no gimmick with me. What you see is what you get. The journey might be longer, but it’s definitely been sweeter. I can look at myself in the mirror every night knowing I’ve never ever pretended to be someone I know I’m not for the sake of this industry. I believe that it’s important to live by your truth in order to be able to sleep peacefully when you rest your head at night. I’ve gone off and taken breaks, not necessarily by choice, but life has a way of giving you breaks, even when you don’t want them, especially in this industry. So, I’ve had a chance to raise my children and to be a mom, and to come back to do more in film and television. I really cannot complain.

KW: Editor Lisa Loving asks: What is the most surprising thing you’d like people to know about you?

NL: That I’m really, really silly and slightly clumsy. I had to re-teach myself how to walk in high heels after the birth of Kez. [Chuckles]

KW: Environmental activist Grace Sinden asks: Do you have a dream role you would like to play?

NL: I would love a good drama, maybe a period piece.

NL: I’ve never really thought about that. I think classic films are classic for a reason. It’s always sketchy to redo one, especially if you’re trying to make it contemporary. That’s really just not the way to go. [LOL]

KW: Eddie Cibrian, who played your love interest in The Best Man Holiday, is also in The Single Moms Club. Did it feel weird that your characters weren’t romantically-linked this time around?

NL: No, I never actually saw him on set, because we didn’t have any scenes together. But it was sort of funny seeing him in the film. I was like, “Omigosh! I totally forgot!”

NL: I know this sounds shallow, but a good pair of new shoes really gets me going.

KW: What do you want that you don’t have yet?

NL: That question’s so loaded! [Laughs] I’d say more choices, more options, more opportunities that force me to grow as an artist and challenge me to grow in a way that I haven’t as of yet.

KW: Congratulations on the success of The Best Man Holiday and on the announcement that another sequel is in the works.

KW: But will we ever get to see a Love Jones sequel?

NL: I have no idea. There have been a lot of rumors, and some bad versions of scripts. I don’t know what’s going to happen. All I do know is that unless it’s right, we won’t do it.

KW: What does Love Jones’ write/director Theodore Witcher have to say?

NL: I haven’t seen or spoken to Ted in a long time? He’s a smart man, though.

KW: The Melissa Harris-Perry question: How did your first big heartbreak impact who you are as a person?

NL: [Breathes deeply, sighs and reflects] That was a big heartbreak, and I wasn’t that young either. I would say that I learned that the heartbreak wasn’t as much about me as the fact that he wasn’t right with himself. I see where his life has taken him, and realize that the handwriting was on the wall. There were things that I had blamed myself for, but it was really more about his choices, his needs and his journey as a person. His desire for too much of everything made it a challenging relationship.

NL: I would love to have the ability to see inside everyone’s heart before I heard them speak or even saw their faces.

KW: You’ll be playing a lawyer on The Divide, a dramatic TV series debuting this summer. Have you started shooting the first season yet?

NL: We have been shooting in cold Toronto. We only have one more episode to go. I’ve been working with Tony Goldwyn, Richard LaGravenese and an amazing group of actors. I play a strong, successful mom.

KW: What’s the show about?

NL: All of us have moments in our lives when we have to choose between what we know is right and what we feel obligated to do. I think that’s the theme of the show. What is your divide? What are the things you struggle with?

NL: At home, it’s all about my babies and no makeup. On the red carpet, it’s: Am I standing up straight?

KW: We’re out of time, Nia, and I still have a million more questions for you from fans.

NL: I’m so sorry. We can do another one soon, Kam.