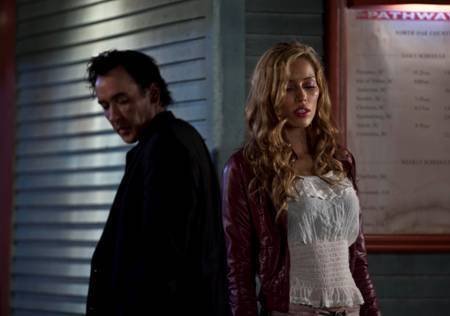 Born in Recife, Brazil, supermodel-turned-actress Rebecca Da Costa studied at the Rui Barbosa School where she pursued her love of theater by writing, directing and starring in a number of plays. At the age of 14, Rebecca was discovered during a model search, and she debuted at Milan Fashion Week a couple of years later en route to gracing runways all over the world for Giorgio Armani, Yves Saint Laurent, Escada and Hugo Boss, to name a few.

The statuesque beauty also became the face of campaigns for Chopard, Swarovski, Nokia and L'Oreal. However, a visit to Los Angeles prompted a permanent move to the States, where Rebecca decided to focus on her true passion, acting.

Her first lead role was in an indie film titled L.A. I Hate You, and her credits came to include a stint on HBO's "Entourage" as well as starring roles in Free Runner, Mine Games and 7 Below alongside Val Kilmer and Ving Rhames. More recently, she wrapped shooting the horror flick Breaking at the Edge with Milo Ventimiglia and Andie MacDowell in which she stars as a bi-polar, pregnant woman in fear for her unborn child's life.

Rebecca currently resides in Los Angeles where, in addition to her modeling and acting career, she devotes her time to such philanthropic efforts as Kids with Autism and Common Ground HIV. To relax, she enjoys dancing, cooking healthy, Brazilian dishes and regularly practicing Transcendental Meditation in order to maintain a healthy mind and body.

As a planetary citizen who has lived on several different continents, Rebecca is fluent in many languages, with Portuguese, Spanish, Italian and English among them. Here, the versatile thespian talks about staring as the femme fatale in the neo-noir thriller The Bag Man opposite Robert De Niro and John Cusack.

Kam Williams: Hi Rebecca, thanks for the interview.

RDC: When I went to audition for the film, they didn’t give me the whole script, but I liked my character Rivka’s dry sense of humor. She seemed so witty in the scenes I read. It seemed like a big challenge, and that was one of the first things that caught my attention.

KW: Were all the big names already attached to the picture at that point?

RDC: When I first got the phone call that I’d booked the job, I didn’t know that John [Cusack] and [Robert] De Niro were attached. But when they gave me the news, I was like “Oh my God!” It was too much for me. And Sticky Fingers, Crispin Glover and Dominic Purcell later joined the cast.

KW: How was it working opposite Cusack and a legend like De Niro?

RDC: It was a mind-blowing experience because I grew up watching those guys. To act opposite them was surreal. But at the same time, you naturally forget who they are after a few days since you’re so focused on getting each scene right. You couldn’t concentrate if you let yourself think, “That’s Robert De Niro.” Still, he was amazing to watch. It was the best acting class I ever had.

KW: I know you like writing and directing. What sort of project might interest you in that regard?

RDC: I’d like to direct children’s movies in ten years or so, because I love everything connected to their universe. But that’s a long-range plan because, right now, I’m just focusing on my acting career.

RDC: I’d love to do a musical, because I love singing and dancing.

KW: You’ve taken a very circuitous route from Brazil to Hollywood. You were discovered in you mid-teens, and moved to Milan as a model, right?

RDC: Yes, I lived in Europe for seven years, in Italy… France… Germany… Austria… Everywhere! Then I moved to New York to work as a model, but I also started taking acting classes. Right after that I moved to L.A. and my career really started to take off.

KW: Are you tempted to move back to Brazil? It’s hot right now, between the World Cup and the next Summer Olympics.

RDC: I love my country, and I go back to visit my family four or five times a year, even though it’s a very long trip. I’ll definitely be going back for the World Cup, because I’m a very big soccer fan. And I hope to attend the Olympics, too. In my dream world, I’d like to live in both New York and Brazil.

RDC: I do this fish dish in the oven with vegetables and brown rice that’s very easy and very healthy and very nice. It only takes about a half-hour to make. I also like to cook and to eat black beans, rice and meat, a traditional Brazilian dish. It’s very similar to a Cuban and Mexican food. That’s what Brazilians have for lunch every single day. It may sound boring, but it’s really, really delicious. [Chuckles]

RDC: I will go with Dolce & Gabbana because it just dresses my body-type  beautifully.

RDC: That my career was going so well that I could live on a desert island. That way, I could shoot a movie, and then hide on my private island. [Giggles] I love my privacy so much that I closed my Facebook account for years. I just reopened it a few months ago at the suggestion of my publicist. But I prefer to be private and even unavailable at times. I’d rather not even turn on my computer sometimes. The world we live in right now, everybody can know where you are in a second.

KW: Why an island?

RDC: I love the beach and the ocean! I’m very spiritual, and that’s where I feel very connected to a higher power.

RDC: Oh God, that’s so deep. I can remember playing with classmates at a school playground at around 4 years of age.

RDC: My best career decision was to move to L.A. I went there to visit a friend, and decided to move there. I remember praying about it to get some guidance. I’m not religious but, as I mentioned before, I am very spiritual. I like to pray to God for guidance. I think it helps me. I remember very clearly being back in Manhattan three days later when I got the phone call that somebody was interested in renting my apartment. I felt so happy as I strolled through Central Park listening to music because I knew I was now free to move. And, from there, everything started happening in my life.

RDC: It impacted me very much. I think it might have been what made me turn to acting. My first big heartbreak was with my father. As the oldest daughter, I was very attached to him. Unfortunately, my mother divorced him, and he wasn’t a part of my life anymore, by his choice, of course. That influenced who I am today, including the roles I choose.

RDC: Funny you should ask, because just the other day I dreamed that the world was collapsing, and the first thing that came to my mind was: Where’s my mother? I would take a plane to be close to my family.

KW: The Viola Davis question: What’s the biggest difference between who you are at home as opposed to the person we see on the runway or on the red carpet?

RDC: On the red carpet, you’re pretty much posing playing a role and answering very generic questions. But in real life, I’m very open and anybody who takes the time to get to know me is going to see that I’m very easygoing, and that I’m a homebody who loves cooking, and relaxing with family and friends. Perhaps people might not sense that from seeing me on the red carpet.

RDC: To be invisible. [Laughs]

RDC: I think you really need to ask yourself if it’s really what you want for your life. And if you decide it’s what you want to do, then focus on it and go for it with 100% of your power. Believe me, I’ve been very lucky, but I still face obstacles every day. I’m acting in English which is not my first language. So, it’s hard. But you have to have that conviction in your heart that this was what you were born to do, and just keep going. Don’t stop!

RDC: The HIV cause is very close to my heart, first of all because I had a cousin with AIDS who passed away a few years ago. Also, I think it’s so unfair that people who are HIV+ are still stigmatized. Come on! We need to support them. And I want to get more involved with children’s charities that touch me.

RDC: I like that question. More than anything, I want to be remembered as a good person who had a great deal of dignity, and also as an actress who was really hard working and who believed in her dreams.

KW: Thanks again for the time, Rebecca, and best of luck with the film.

RDC: Thanks Kam, this has been an entertaining interview, because it allowed me to show a side of myself that I don’t think people have seen before.