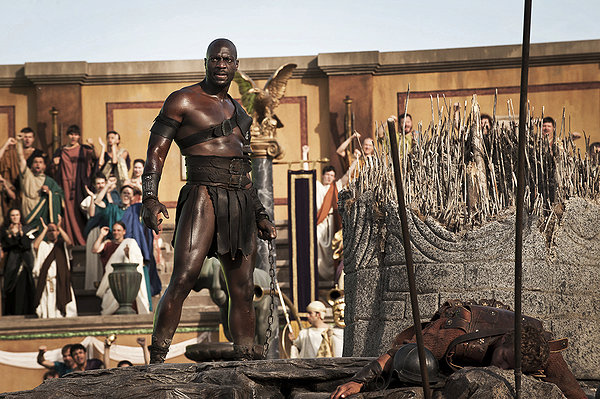 Pompeii (PG-13 for intense violence, disaster scenes and brief sexuality) Romance drama, set in 79 A.D. against the backdrop of the eruption of Mount Vesuvius, revolving around the efforts of a slave-turned-gladiator (Kit Harrington) to rescue his soul mate (Emily Browning) before she is forced by her wealthy father (Jared Harris) into an arranged marriage to a crooked politician (Kiefer Sutherland). With Rebecca Eady, Carrie-Anne Moss, Sasha Roiz and Adewale Akinnuoye-Agbaje.

Almost Human (Unrated) Sci-fi horror flick about a guy (Josh Ethier) who disappears in a flash of bright light only to return to town just as mysteriously two years later right before the start of a string of grisly murders. With Graham Skipper, Vanessa Leigh and Susan T. Travers.

Black Out (Unrated) Shades of The Hangover in this Dutch crime comedy about a groom-to-be (Raymond Thiry) who becomes the prime suspect in a murder case when he wakes up with amnesia on the eve of his wedding lying in bed next to a corpse. Cast includes Kim van Kooten, Bas Keijzer and Renee Fokker. (In Dutch for subtitles)

Child’s Pose (Unrated) Crime drama about a wealthy socialite’s (Luminita Gheorghiu) attempt to manipulate the legal system to prevent her son (Bogdan Dumitrache) from being brought to justice after he’s arrested for manslaughter. With Vlad Ivanov, Florin Zamfirescu and Natasa Raab. (In Romanian with subtitles)

Highway (Unrated) Bollywood abduction drama about an engaged couple (Randeep Hooda and Alai Bhatt) who suddenly find themselves kidnapped four days before their wedding. (In Hindi and Nepali with subtitles)

Holy Ghost People (R for violence, profanity and drug use) Psychological thriller, set in the Appalachian Mountains, about a 19 year-old (Emma Greenwell) who enlists the assistance of an ex-Marine (Brendan McCarthy) to save her sister (Buffy Charlet) who has come under the spell of the charismatic cult leader (Joe Egender) of a snake-handling, Pentecostal congregation. With Roger Aaron Brown, Cameron Richardson and Don Harvey.

In Secret (R for sexuality and violent images) Romance drama, set in Paris in the 1860s, about a young woman (Elizabeth Olsen) forced by her domineering aunt (Jessica Lange) into a loveless marriage with her own cousin (Tom Felton), who embarks on an illicit affair with a friend (Oscar Isaac) of her husband. With Mackenzie Crook, Matt Devere and Lily Laight.

Omar (Unrated) Middle East saga about a Palestinian terrorist (Adam Bakri) who turns informant after being tricked by interrogators into confessing that he killed an Israeli soldier (Foad Abed-Eihadi). Cast includes Essam Abu Aabed, Adel Abu-Lasheen and Baher Agbariya. (In Arabic and Hebrew with subtitles)

One Candle, Two Candle (Unrated) Iraqi comedy about a teenager (Katrin Ender) who runs away to the arms of an artist (Perwar Tariq) her own age rather than consummate her arranged marriage to an elderly businessman (Kurdo Galali). With Nalin Kobani, Dilsoz Maweti and Heyder Behcet. (In Kurdish with subtitles)