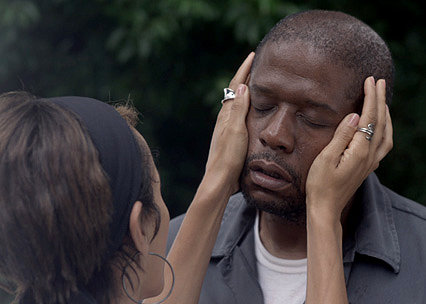 Forest Whitaker is a distinguished artist and humanist. He is the founder of PeaceEarth Foundation, co-founder and chair of the International Institute for Peace and is the UNESCO Goodwill Ambassador for Peace and Reconciliation.

He is also a talented, versatile performer and one of Hollywood's most accomplished figures. He has received prestigious artistic distinctions including the 2006 Academy Award for Best Actor for his performance in The Last King of Scotland as Ugandan dictator Idi Amin.

Forest has dedicated most of his time the past decade to extensive humanitarian work. His social awareness has compelled him to seek ways of using the film medium as a means to raise peoples' consciousness.

To that end, he produced the award-winning documentary Kassim the Dream, which tells the poignant story of a Ugandan child soldier turned world championship boxer; Rising From Ashes, which profiles genocide survivors of the Rwandan war who have risen from wooden bicycles to competing in the Olympics; Serving Life, which focuses on hospice care for prisoners at Louisiana's Angola Prison; and the Emmy-nominated and Peabody Award-winning Brick City, which takes a look at life in inner-city Newark, New Jersey.
In 2007, he received the Cinema for Peace Award for his selfless and ongoing advocacy for child soldiers, as well as for his work with inner-city youth. The following year, he served as a member of the Urban Policy Committee and currently sits on the board of the President's Committee on the Arts and the Humanities (PCAH).

In 2011, Forest was designated as a UNESCO Goodwill Ambassador for Peace and Reconciliation. In this role, he works towards global peace building through anti-violent education, research, training and community building.

In 2013, Boston University's Howard Gotlieb Archival Research Center appointed Forest as a Martin Luther King, Jr. Fellow. Plus, he currently serves as a Senior Research Scholar at Rutgers University, and as a Visiting Professor at Ringling College of Art and Design.

Kam Williams: Hey Forest. Great to tallk to you again.

FW: Wow! Thanks a lot for that.

KW: It was also #1 on my annual Blacktrospective, where I named you the #1 black actor of the year.

FW: Thanks for the support. I appreciate that.

KW: Do you have anything you’d like to say about the passing of Philip Seymour Hoffman?

KW: I really enjoyed this new movie, Repentance. Although it’s a little different, for some reason, it reminded me of an art house film of yours many people might have missed called Ripple Effect.

FW: It’s very different, in a way, because my character in Ripple Effect was very actualized. In that case, he totally forgave the lead character played by Philippe Caland, who happens to be the director of this movie.

KW: I didn’t realize that.

FW: Yeah, Philippe’s character in Ripple Effect was tormented and unable to move past the things he’d done in his past. So, it’s a similar thematic.

KW: I have a lot of questions from fans. Let’s start with Editor/Legist Patricia Turnier who asks: What interested you in producing and starring in Repentance?

FW: I’d say the fact that it’s a movie that talks about dealing with your past issues and past pain, and being able to move forward in the future from that. I think that’s a lesson that we all have to deal with and learn from. In addition, the film offered me a great opportunity to do a really interesting character with an amazing cast of actors, and to be directed by a friend and associate, one of my partners. We own a company together. So, a lot of things came together to make this happen for us.

KW: What message do you think people will take away from Repentance?

FW: Understanding and searching for the truth by dealing with issues from the past, by taking them out and allowing them to be present so that you can move past them or with them into your future. I think this film suggests it’s possible to address even those hidden secrets that we keep sequestered under the rug of our minds.

KW: Vassar Film Professor Mia Mask asks: How do you prepare for a role? What steps do you take to understand and become Angel Sanchez?

FW: I read a number of different books and articles on mental illness… about schizophrenia, bipolar disorder, medications and issues surrounding those topics. And I also did some interviews with people dealing with those things. So, that helped shaped part of Angel. For the rest of it, I tried to look at grief and pain. I wanted to understand the stages of grief, and the escalation that might happen if this person was in deep pursuit of the truth about the loss of his mother, and then you put the other stuff on top of that. So, I just kept piling it on until it started to leak out in the movie.

KW: Harriet Pakula-Teweles says: Thank you for The Butler--your performance and that of the great ensemble cast made the movie truly memorable. What consideration enters into your decision to take on a role?

FW: I think every character bears it, but I’d like to know that the movie’s going to shed some more light on our humanity, and open up another door for me. I think the biggest thing that motivates me when I’m choosing a part is a role that will help me continue to grow as a person and as an artist, and a role that will deepen my understanding of humanity, and my connection to it.

KW: Environmental activist Grace Sinden says: I loved you in The Butler. Is there a particular role that you would like to do next, if you could choose any one you want?

FW: Well, I’ve been playing around and toying with doing the Louie Armstrong story. I’ve developed a script we’ve been working on. It still may happen. That’s interesting to me. Otherwise, I’m just looking for characters that continue to make me stretch and grow and learn more about the human condition.

KW: Jazz pianist Steve Kramer, who played with Artie Shaw, says: Man, I would love to talk to you about the making of Bird. I was a friend of Chan, Charlie Parker's wife. Long before you played Bird, Hollywood expressed an interest in having Richard Pryor play Parker. Chan did not want him to play Parker because at the time Pryor was having problems with drugs and shooting up cars. Chan always wanted Bird's story to be more about his music and his more stable side when he wasn't so hopped up. So, one thing I would love to know is, what was it like meeting Chan Parker and did she play any of the secret tapes she has of Bird that I was privy to hear.

FW: Well, she gave some of those to Clint [director of Bird, Clint Eastwood]. But I did have an opportunity to spend some time with her and to talk with her at length. She also gave me a copy of her book “To Bird with Love.” I read that and spoke with some other people I met through her. She and the musicians I met were very helpful to me in terms of understanding Charlie Parker and formulating the character.

KW: Steve says: another thing I’d like to ask is, how has being an actor made you a better person, and how difficult is it to balance a personal life with the life of a working actor? Do relationships and family suffer?

FW: I think it’s allowed me to understand more about myself, and to understand more about others. In that way, it has helped me better myself, and expand myself. As far as family, it’s always difficult to be away, which a film career calls for. You’re often away for months at a time. You have to try to find a balance by having your loved ones on location with you or you can go back to visit them. There’s also the phone, Skype and other things of that nature. It’s a struggle, but this isn’t the only profession that has to deal with adverse conditions. For instance, I met a cab driver who hasn’t been back home for years. I’m lucky that I don’t have that kind of distance from my family.

KW: Documentary filmmaker Kevin Williams would like to know what you learned from being directed by Clint Eastwood in Bird.

FW: I think Clint trusts himself completely. I came to appreciate that kind of trust that he has in the artists and his choices that allows you to feel like you’re walking in some form of grace. I think the other thing would be that he’s worked with his crews for so many years, for 15, 20, sometimes 25 years.  As a result they truly operate like a well-oiled machine. That’s a great insight to learn about the relationships you want to nurture and maintain.

KW: Kevin also asks: When did you realize that you could carry a film as the star?

FW: I guess it would be around the time I made Bird, because, although I wasn’t all that confident about my performance, it was the first time I was allowed to be the focal point of a film.

KW: Mike Pittman asks: When did you get your first big break as an actor?

FW: My first big break? I think The Color of Money was very instrumental in opening up other opportunities. People started to recognize me as an artist after that film. And then, after I did Bird, it was more solidified.

KW: Reverend Florine Thompson asks: Did playing The Butler make you more empathetic toward our ancestors?

FW: Yeah. I think one of the great things Lee did was humanize his characters in a way that they could experience all these emotions as they walked through history. As a result, I came away with a deeper understanding, an in-dwelling, a knowing that I didn’t have before, as opposed to its just being an intellectual or emotional exercise.

KW: Reverend Thompson also asks: Was making The Butler a "game changer" for you spiritually, emotionally or politically?

FW: Working on the film, a transcendent space was created for me that I was able to carry to my next film. So, in that respect, it served as a catalyst for change in my work. Certainly, it was also a solidifier of an understanding of social justice in my life.

FW: It varies. It’s a wave that comes over you. Sometimes, it comes from just sitting still quietly in the moment. Or it can be the feeling you get looking out a window at a tree while riding in the back a car. It’s not a permanent space. It’s a place that moves with me different places that I go in my life. It happens quite often. I feel it in my skin.

KW: Is there something you wish people would note about you?

FW: The desire to connect.

KW: Well, thanks again, Forest. Good luck with the film.

FW: Thanks, Kam. Good talking to you.