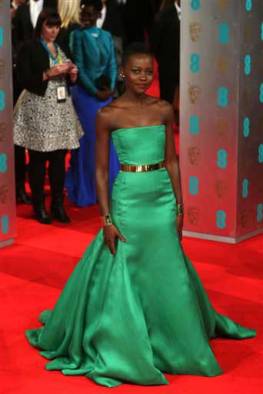 The force of "Gravity" was strong at the British Academy Film Awards on Sunday — but it was unflinching drama "12 Years a Slave" that took the top prize.

Ejiofor thanked McQueen, a visual artist who turned to filmmaking with "Hunger" and "Shame," for bringing the story to the screen.

Holding the trophy, the British actor told McQueen: "This is yours. I'm going to keep it — that's the kind of guy I am — but it's yours."

McQueen reminded the ceremony's black-tie audience that, in some parts of the world, slavery is not a thing of the past.

"There are 21 million people in slavery as we sit here," he said. "I just hope 150 years from now our ambivalence will not allow another filmmaker to make this film."

The prizes, coming two weeks before Hollywood's Academy Awards, are watched as an indicator of likely Oscars success.

It was a good night for lost-in-space thriller "Gravity," which won six prizes, including best director for Alfonso Cuaron.

The 3-D special effects extravaganza also took the awards for sound, music, cinematography and visual effects. And despite its mixed parentage — made in Britain by a Mexican director and starring American actors —it was named best British film.

Cuaron paid tribute to star Sandra Bullock, who is alone onscreen for much of the film.

"Without her performance, everything would have been nonsense," he said.

The best-actress prize went to Cate Blanchett for her turn as a socialite on the slide in "Blue Jasmine." She dedicated the award to her friend and fellow actor Philip Seymour Hoffman, who died this month, calling him "a monumental presence who is now sadly an absence."

"Phil, buddy, this is for you, you bastard. I hope you're proud," Blanchett said.

The supporting actor prize went to Barkhad Abdi, who made an explosive screen debut as a Somali pirate in "Captain Phillips."

The 28-year-old called his experience of going from obscurity in Minnesota to stardom — complete with an Oscar nomination — "surreal."

In the past few years, the British prizes, known as BAFTAs, have helped underdog films, including "Slumdog Millionaire," ''The King's Speech" and "The Artist," gain Oscars momentum.

The prize for adapted screenplay went to "Philomena," based on the true story of an Irish woman's decades-long search for the son she was forced to give up for adoption.

The awards have become an essential stop for many Hollywood stars before the Academy Awards, held this year on March 2.

The temperature in London was hardly Hollywood, but Britain's fickle weather relented ahead of Sunday's ceremony. The sun shone as nominees including "Wolf of Wall Street" star Leonardo DiCaprio and "12 Years a Slave" performer Lupita Nyong'o— striking in a green Dior gown — walked the red carpet outside London's Royal Opera House.

There was royalty of the Hollywood kind — Brad Pitt and Angelina Jolie, wearing matching tuxedos. And there was British royalty, too, in the form of Prince William, honorary president of the film academy.

The documentary prize went to Joshua Oppenheimer's "The Act of Killing," a powerful look at hundreds of thousands of killings carried out in 1960s Indonesia in the name of fighting communism.

Will Poulter ("Son of Rambow," ''We're the Millers"), a 21-year-old actor, won the rising star award, decided by public vote.

Greenaway said he hoped the trophy would encourage those, like him, "who believe that cinema has to be continually reinvented."

Helen Mirren received the British Academy Fellowship in recognition of a career that has ranged from a hard-nosed detective in TV series "Prime Suspect" to Queen Elizabeth II in "The Queen."

Mirren, 68, said she was "almost speechless" at receiving the honor, whose previous recipients include Charlie Chaplin, Alfred Hitchcock, Elizabeth Taylor and Judi Dench.

"It's been an amazing journey up to now," she said.

She was given the trophy by Prince William — who said he should probably call her "granny." Mirren won an Oscar for playing his grandmother, Britain's monarch, in "The Queen."

"I wanted to have a hanky in my bag and take it out and spit on it and clean his face," Mirren joked.

PHOTO: Actor Lupita Nyong'o poses for photographers on the red carpet at the EE British Academy Film Awards held at the Royal Opera House on Sunday Feb. 16, 2014, in London. (Photo by Joel Ryan/Invision/AP)

Jill Lawless can be reached at http://Twitter.com/JillLawless