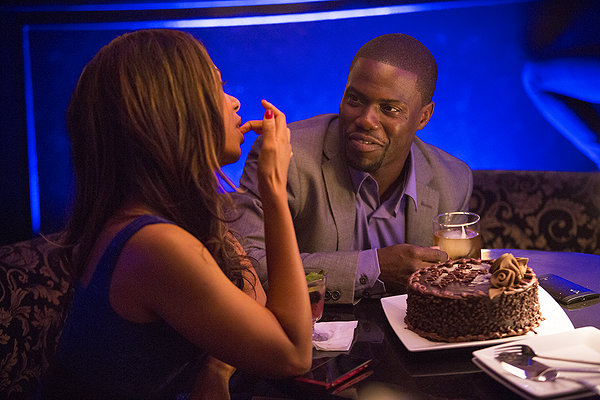 Regina Hall began her acting career in the late 1990's while simultaneously earning a master's degree from New York University. With numerous film and television credits to her name, Regina has since emerged as one of Hollywood’s most sought after comedic actresses.

Last fall, she was seen reprising her role in the sequel The Best Man Holiday, alongside Terrence Howard, Taye Diggs, and Sanaa Lathan, which opened #1 at the box office. In June, she will again star opposite Terrence J, Gabrielle Union, Taraji P. Henson and Michael Ealy in the sequel Think Like a Man Too.

The versatile thespian additional credits include Scary Movie (and three of its sequels), Paid in Full, Malibu’s Most Wanted, First Sunday, Law Abiding Citizen, Death at a Funeral, Love & Basketball and Disappearing Acts. Her television credits include the role of Deputy D.A. Evelyn Prince on “Law & Order: LA” and Coretta Lipp on “Ally McBeal.”

Something Kevin Hart is an expert at is selling shoes. And if there’s one thing Kevin can do even better than selling shoes, it’s comedy. He began his first career sizing men and women for footwear, when a chance, electrifying performance on amateur night at a Philadelphia comedy club changed his life forever. He soon quit that job as a shoe salesman and began performing full-time at such venues as The Boston Comedy Club, Caroline’s on Broadway, Stand Up NY, the Laugh Factory and The Comedy Store in Los Angeles.

However, it was a memorable appearance at the Montreal Just for Laughs Comedy Festival that led to roles in Paper Soldiers, Scary Movie 3 and Along Came Polly, which starred Ben Stiller and Jennifer Aniston. Kevin has worked nonstop ever since, and 2013 was no exception, including Grudge Match, opposite Sylvester Stallone and Robert De Niro, and Let Me Explain, a stand-up comedy film chronicling the best of his world concert tour of the same name.

This year, he’s already had a #1 hit movie in Ride Along, which has grossed over $100 million and counting. And among his earlier film credits are Little Fockers, Death at a Funeral, Fool’s Gold and The 40 Year-Old Virgin.

Here, Kevin and Regina discuss their new film, About Last Night, a remake of the classic romantic comedy released back in 1986.

Kam Williams: Hi, Kevin and Regina, thanks for the interview. I’m grateful for the opportunity to speak with you.

Regina Hall: Hi, there, Kam. We appreciate it, too.

Kevin Hart: How you doing, man?

Kam: Great! Kevin, how does it feel to be back in Philly?

Kam: What interested you two in About Last Night?

Regina: Well, I loved the script. I’m always thrilled whenever I see a good script. And of course, when I then heard that Kevin was going to be my co-star… that sealed the deal. Need I say anything more? How about you, Kev?

Kevin: Like you, the script, first of all. I also liked that this was a different type of role for me, and that the original movie was so amazing!

Kam: What factors played a role in doing a remake?

Kevin: The fact that we’d be following in its footsteps was huge. But we also wanted to follow more closely the lines of the original play it was based on, “Sexual Perversity in Chicago.” We modernized it and made this version a little edgier to fit audiences of this generation. So, all the pieces of the puzzle were there, it was just a question of putting them together.

Regina: Yeah, it was already there on the page. We just adapted it in a way to make it fresh, contemporary, sexy and fun. We also kinda followed the journey of two couples as opposed to one, so you get to see us explore the dynamics in the friendships between the men and the women, as well as in the couples’ relationships. It ended up feeling great!

Kam: Was it hard juggling egos on the set?

Kevin: Not at all. It was basically just four good people.

Kevin: There weren’t any jerks. Everybody came with the same agenda which was to make a great film. And when you all have your eyes on the prize, in this case to turn in a quality product and to turn in a complete product, at the end of the day, you can’t ask for a better support group than what we had.

Kam: Who’s in your target audience?

Kevin: This is a universal film, with the exception of certain younger age groups, since this is an adult film.

Kevin: It’s a movie that so many people are going to be able to relate to.

Kam: Kevin, you’re already on a roll with Ride Along breaking records for a January opening.

Kam: With About Last Night opening you’re competing against yourself.

Kevin: Hey, that’s a good thing, especially since this is a different look for me. People walking out of this movie are going to know that I have levels, that I’m serious about my acting career, and that I’m willing to challenge myself. This product is a great representation of that.

Kam: Does this picture have a message?

Kevin: Yeah, it actually does. The movie shows that couples weather their crises differently, and that each is going to solve their problems in the unique way they see fit to. But when you’re in love, love makes you do crazy things, and can take you down a whirlwind of a road. These are two couples that experience that, and we show how men talk to men and how women talk to women about their problems, and how it all comes full circle.

Kam: Regina, what’s up next for you?

Regina: I’ll be joining this gentleman again in June for the release of Think Like a Man Too.

Kevin: After that I’ll be in a movie called Wedding Ringers.

Regina: Which is hilarious, by the way. I’ve seen a few excerpts. It’s another hit.

Kevin: No, it’s more like a modern version of Hitch.

Kam: Is there any question no one ever asks you, that you wish someone would?

Kevin: Yeah, how tall are you?

Kam: Okay, how tall are you?

Kam: How about you, Regina? Is there any question no one ever asks you?

Kam: The Sanaa Lathan question: What excites you?

Kevin: You know what? The most exciting thing in the world to me is that I’m doing what I love to do, and that I’m successful doing it. Pursuing my dream and executing it is exciting to me.

Regina: I’m just excited about life. Life is really good right now with my family and friends, and being able to work with people I respect.

Kam: I’ve asked Kevin this before. Regina, what is your favorite dish to cook?

Regina: I do dice a nice hot dog. I also make great lamb chops. And I make really good yams. There isn’t much I can’t get into that kitchen and do.

Regina: Thanks. You’ve got to have just the right balance of peanut butter and jelly.

Kevin: And that jelly’s coming from scratch!

Kevin: Kam, have you ever had jelly from scratch?

Kevin: Then you got to get to Regina’s house.

Kam: Invite me, and I’m there! The Ling-Ju Yen question: What is your earliest childhood memory?

Regina: Swimming into my mama.

Kevin: Mine was touching a dead mouse by accident.

Kam: Well, thank you both for the spirited tete-a-tete!