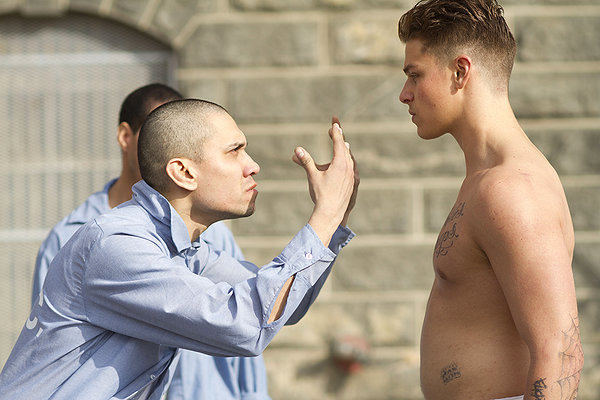 Born in L.A. on July 14, 1975, Jimmy “Taboo” Gomez began dreaming about show business at an early age. The versatile fourple threat is a multilingual rapper, singer, dancer and emcee who got his big break in 1995 when approached by will.i.am to form the Black Eyed Peas.

Among the popular hip-hop group’s hits are the Grammy-winning “I Gotta Feeling,” “Let’s Get It Started,” “Boom Boom Pow” and “My Humps,” to name a few. Besides music, Taboo is also the designer of his own line of footwear, Taboo Deltah, and has added acting to his bag of tricks.

Here, he talks about his latest outing as Guillermo in Jamesy Boy, a fact-based tale of redemption co-starring Ving Rhames, James Woods and Spencer Lofranco. Although he wants to make more movies in the future, he is currently focused on his own solo album releasing later in the year, as well as on an upcoming tour with the Black Eyed Peas.

Kam Williams: Hi Taboo, thanks for another interview.

KW: Like last time, I’ll be mixing in my questions, with some from my readers. How did you get interested you in acting?

T: Well, I had actually been taking acting classes prior to joining the Black Eyed Peas in ‘96. In fact, I originally thought it was going to be my introduction to the entertainment world, because Black Eyed Peas was more of a local, L.A. underground band. I kept up with the acting classes as a safety net, until we took off a couple of years later, after the release of our first album. Once we started touring, I had to put acting on hold, although I still wanted to act. Fast-forward to 2005, when I made my feature film debut playing a character named Ramirez in Dirty, with Cuba Gooding, Jr., Clifton Collins, Wyclef [Jean] and a couple other people. Then I did a movie called Cosmic Radio and, after that, one called Streetfighter. And now, Jamesy Boy.

KW:  Editor/Legist Patricia Turnier asks: What drew you to the story of James Burns and what is your perception of him?

T: The reason I got the movie is because my acting coach presented the script to me, and I fell in love with the role of Guillermo. I’m a big James Woods fan, so when I found out he was already attached to the film, I was sold.

KW: Patricia also asks: How did you prepare to play Guillermo?

T: I really wanted to challenge myself, so that I wouldn’t just be Taboo of the Black Eyed Peas up on the big screen. I did something that’s a no-no in the music industry. I cut my hair. For years, my hair was my stamp. “Oh, that’s the long-haired guy from the Black Eyed Peas.” But when I did it, it was like a breath of fresh air. So, I immersed myself into the character Guillermo to the fullest, with intense power, since I wanted to show the world that I’d go that extra mile because I believe in this project and in my acting abilities so much, and because I want to continue to do films.

KW: Well, you definitely disappeared into the role. I barely recognized you.

T: Thanks, Kam. That’s what I want to hear. I love when people say that.

KW: Did you base your character on a hardened convict you know?

T: Guillermo was kind of a reflection of my family, on my dad’s side. My father came from a gang lifestyle. My brother, who passed away last year, God rest his soul, had been in prison for many years. He had the bald head, the tattoos, and served as an inspiration for Guillermo, being the closest person to me in prison and living that hard lifestyle. But also, there was an insecurity I saw in him that I brought to Guillermo who was a bully and antagonistic as a defense mechanism.

KW: Sorry to hear about your brother. I do remember how in your autobiography you credited your grandmother for saving you from the streets.

T: Yeah, if it wasn’t for her and my mom taking me away from that lifestyle, my life would’ve gone in a totally different direction. When my mom divorced my dad, she introduced me to a new world. I’m blessed that I had a strong grandmother who gave me a second chance at life. So, I owe her a lot.

KW: Jamesy Boy had a pretty impressive cast, including veterans like James Woods and Ving Rhames.

T: They were all great people. I worked mostly with James Woods, Spencer [Lofranco] and Ben [Rosenfield]. We had a really good time both on and off the set. I enjoyed working with Trevor [director Trevor White], too. I was able to hang out with him as friends, go to the clubs, and hear his stories. It was a great opportunity to work with such a great cast and crew and to make some new friends.

KW: What’s going on with you musically?

T: I’ve been talking about it since 2008, but my first single is finally coming out in April, “Dumbao.” It’s dedicated to the World Cup. I’m Latino-American, and I wanted to do something that best represents my culture. So, I created this song that’s in Spanish, but has the pulse, rhythm and beat of a Black Eyed Peas song.

KW: What interested you in linking the release to the World Cup?

T: I supported the World Cup four years ago with the Black Eyed Peas, and I fell in love with the atmosphere so much that when I learned that the next one was going to be in Brazil, I love Brazil so much that I was like, “I gotta be there! I gotta create an anthem that will go hand-in-hand with the World Cup.” And that’s what I did.

KW: I loved that album, “Timeless,” that you recorded down in Brazil with Sergio Mendes.

T: Thank you, that was great.

KW: Since we’re on the subject of music, what was the last song you listened to?

T: You’re gonna laugh at me, dude, because I have a 2 year-old and a 4 year-old who are heavily into movie soundtracks. For some reason, we’ve watched Despicable Me 2 over a thousand times in the last month. They really love the song “Happy” by Phrarell. We’ve been playing that non-stop. It’s like our anthem to get them ready for school. So, that’s the last song I listened to today.

T: My wife and I sometimes read books together. It’s kind of like bed talk. Right now, we’re sharing “The 5 Love Languages: The Secret to Love That Lasts.”

T: With my wife and kids.

T: Yeah, release my own music.

T: It made me stronger, as far as chasing my dream, and knowing that I was onto something with music, because the first person who broke my heart had no faith in me.

KW: The Viola Davis question: What’s the biggest difference between who you are at home as opposed to the person we see performing onstage or onscreen?

T: At home, I’m daddy and a husband. There’s no Superman’s cape. I’m changing diapers, giving my kids baths, and coloring Angry Birds and playing games with them. Most of my career, people have the misconception about me as being threatening and scary, and having an intense look, but that’s not the real me. I’m very domesticated when it comes to my family. First and foremost, I’m a father and a husband.

T: The ability to shape shift into different people.

T: The drive and the passion to succeed.

T: I don’t think they need to remake it, but I would love to be in Back to the Future. That’s my favorite movie of all time.

KW: If you could go back in time and change one event in history, what would you choose?

T: To prevent the conqueror Cortes from causing the collapse of the Aztec Empire.

KW: Attorney Bernadette Beekman asks: What is your favorite charity?

T: Little Kids Rock, a charity in East L.A. that gives musical instruments to schools that no longer have music or art classes.

KW: Thanks again for the time, Taboo, and best of luck with all your endeavors.