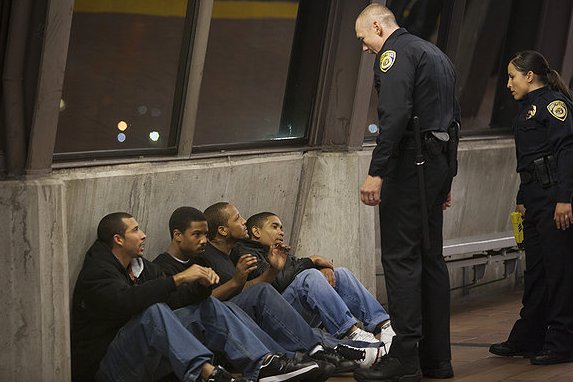 Oscar Grant (Michael B. Jordan) and his girlfriend, Sophina (Melonie Diaz), were returning to Oakland in the wee hours of the morning after attending a New Year’s Eve 2009 celebration when their crowded train was stopped by police in response to a report of a disturbance.

Oscar was among a number of male passengers ordered onto the platform at Fruitvale Station, where he was initially allowed to sit quietly with his back against the wall. However, he was subsequently ordered to lie on his stomach so that he could be handcuffed and placed under arrest. When he resisted, a struggle ensued during which Oscar could be heard begging not to be Tasered as a cop yelling “bitch-ass [N-word]” forced him to the ground.

Another officer pulled out a pistol and proceeded to shoot unarmed Oscar in the back, prompting the mortally-wounded young father to exclaim, “I got a 4 year-old daughter!”

The entire incident was captured on a cell phone by a fellow straphanger who posted the video on Youtube, thereby instantly turning the controversial slaying into an international cause célèbre. Had Oscar been callously executed or accidentally killed by a cop who had merely mistaken his .40 caliber weapon for his stun gun?

Guilt or innocence, a matter ultimately left for a jury to decide, is not the primary focus of Fruitvale Station. Instead, this bittersweet biopic seeks to humanize the very colorful Oscar Grant by chronicling the serendipitous series of events leading up to his untimely demise.

The film unfolds over the course of the last day in the charming 22 year-old’s abbreviated life, a period during which he interacts affectionately with Sophina, their daughter (Ariana Neal), his mother (Octavia Spencer), pals, strangers and other relatives. For instance, we see Oscar inform his disappointed girlfriend that he’s lost his job as a clerk at the local supermarket. Later, he tucks tiny Tatiana into bed and promises to take her to Chuck E. Cheese the next day. And he ominously takes to heart his mom’s erroneous presumption that riding the train would be a lot safer than driving to San Francisco that fateful night.

Already winning awards at both the Cannes and Sundance Film Festivals, Fruitvale Station marks the remarkable writing and directorial debut of Ryan Coogler. A recent USC School of Cinematic Arts grad, the gifted 27 year-old exhibits the talents of a seasoned veteran here, crafting a character-driven tale that’s touching and emotionally-engaging without resort to either sentimentality or melodrama.

Some of the credit must also go to Michael B. Jordan for his compelling, warts-and-all portrayal of Oscar, a complicated soul with perhaps as many positive attributes as faults. The support cast deserves a share of accolades, too, for ensuring that the palpable production, one well grounded in a sobering, inner-city reality, never hits a false note.

Whether Oscar Grant deserves to be remembered as a martyr or a provocateur, this poignant portrait of him as a flawed free-spirit is moving enough to be remembered come Academy Awards season.

Distributor: Anchor Bay / The Weinstein Company Blu-ray/DVD Combo Pack Extras: Q&A with the cast and filmmakers; and The Story of Oscar Grant.