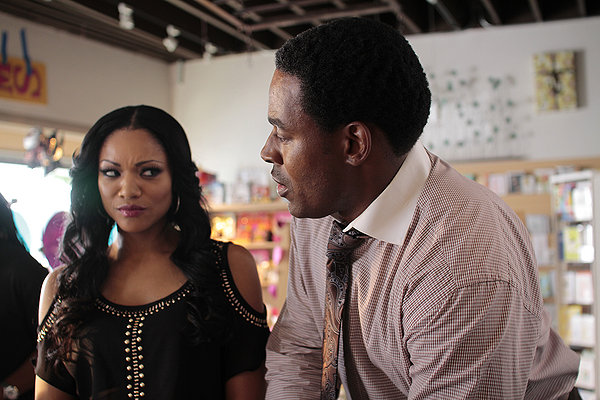 Robert’s (Darrin Dewitt Henson) whole world collapses the day he’s fired from the business founded by his late father only to come home to an unsympathetic girlfriend (Erica Hubbard) who has decided to dump him because he can’t afford to take care of her. To add insult to injury, Mita drops the bomb that she’s been cheating on him with Nate (Josh Ventura), the guy who just terminated him.

But the jilted housepainter isn’t down in the dumps for long, since he soon crosses paths with Morgan (Gabrielle Dennis), a gorgeous attorney he falls head-over-heels for at first sight. The available divorcee happens to be moving into a drab office that’s crying out for a makeover, a condition which conveniently dovetails with housepainter Robert’s need for a job.

He closes the deal by offering the “pretty woman discount,” so it looks like clear sailing at first blush. Not so fast, Kimosabe, since the tired-and-true modus operandi of the stock romantic comedy is to keep the leading man and woman apart until the very end when they disappear into the sunset together.

Such is the case with Black Coffee, a pleasant, if predictable affair written and directed by Mark Harris (Black Butterfly). For, every time Robert and Morgan appear ready to take the relationship to a deeper level, a monkey wrench is thrown into the works, like the return of her ex-husband (Lamman Rucker) who wants to reconcile.

Too bad much of the dialogue strains credulity here, such as Morgan’s cruel cross-examination of Robert when she asks whether he can read, why black people always have to talk while they’re working, and whether he’s a man of God. Of course, the perfect gentleman passes the test with flying colors, but isn’t there a less antagonistic method for a sister to find her soul mate?

A pat, if unconvincing, romantic romp determined to march inexorably to an implausible, happily ever after finale, whether you like it or not.