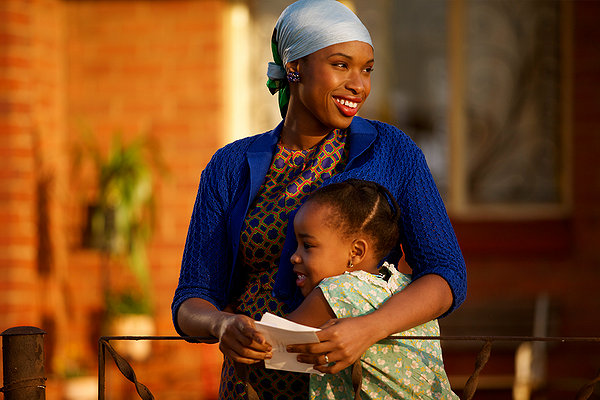 Winnie Mandela (Jennifer Hudson) is a controversial figure in the annals of South African history. For not only was she the first wife of freedom fighter-turned-President Nelson Mandela (Terrence Howard), but she was also convicted of orchestrating a number of gruesome human rights violations.

At the height of the anti-apartheid movement, she headed a goon squad which doled out street justice to blacks suspected of collaborating with the white establishment. With Winnie’s blessing, snitches would be sentenced to death by necklace, meaning by having a gasoline-soaked tire placed on their shoulders and set on fire. Stompie Moeketsi, 14, was just one of the victims.

After the fall of Apartheid, she confessed before the country Truth and Reconciliation commission to “the murder, torture, abduction and assault of numerous men, women and children.” So, it’s understandably hard to put a sympathetic spin on such an infamous political figure.

That is the challenge tackled by director Darrell Roodt in Winnie Mandela, a warts-and-all biopic which focuses on its subject’s childhood, college days and marriage while making short shrift of her transition into a war criminal. Along the way, we learn that she was a headstrong tomboy who blossomed into the irresistible beauty that Nelson fell in love with at first sight.

Sadly, the two were separated for 27 years while he was imprisoned on Robben Island for treason because of his call for an end to Apartheid. Perhaps that was what led Winnie to rationalize resorting to fighting the government and stool pigeons by any means necessary.

As for the acting, Jennifer Hudson and Terrence Howard do their best to adopt appropriate accents, but they both sound fake since they’re surrounded by a cast comprised of actual South Africans. The production’s most glaring flaw, nevertheless, is that the poorly-scripted screenplay simply fails to give the audience much of a reason to invest in unlikable Winnie’s life story.

Winnie Mandela, less an honorable “Mother of the Nation,” than a disgraceful, “bad mother-[shut your mouth]!”

R for violence and profanity