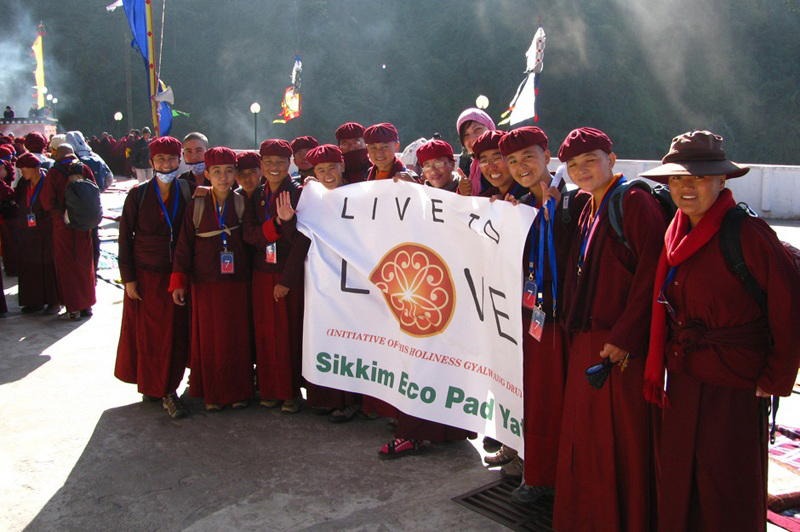 Seven Hundred Buddhist monks and nuns decided to embark on a 500-mile trek across the Himalayas to bring attention to the ecological devastation being visited upon the region’s glaciers by climate change. That perilous journey across treacherous terrain and at altitudes as high as 17,000 feet is the subject of Pad Yatra: A Green Odyssey, an Earth-friendly documentary marking the directorial debut of Wendy J.N. Lee.

Ms. Lee, an Asian American, shot the visually-captivating adventure with a solar-powered camera, and subsequently enlisted actress Daryl Hannah to provide the picture’s voiceover. The ascetic march was led by a guru named Ngawang Sodpa, whose devotees were quite photogenic, outfitted in brightly-colored robes, as they negotiated narrow paths through the mountains and valleys.

Along the way, the hardy band of travelers deal with frigid temperatures, illness, injuries and starvation while periodically stopping at villages to preach about preserving the planet. At one port-of-call, they encounter an obnoxious German tourist intent on purchasing some of a monastery’s ancient artifacts.

Wendy’s sister, Carrie, an attorney also making the pilgrimage, informs the European interloper that the priceless spiritual items aren’t for sale. But instead of taking “no” for an answer, the would-be looter asks to speak to the white person in charge. When resolute Carrie insists that the buck stops with her and reiterates her decision, the guy gets so incensed that he starts hitting her with a stick.

Otherwise, the well-intentioned Pad Tatra proves to be a peaceful walk effectively warning about global warming from the top of the world.

In English and Tibetan with subtitles