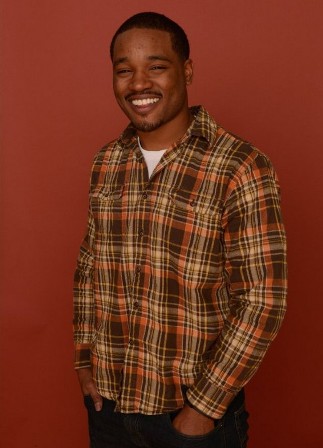 Born in Oakland, Calif., on May 23, 1986, Ryan Coogler attended college on a football scholarship, playing wide receiver as an undergrad before earning his MFA in Film and Television Production at the University of Southern California in 2011. He worked as a security guard and as a counselor to inmates at a juvenile prison in San Francisco before getting his big break with the help of Forest Whitaker.

The Oscar-winning actor agreed to produce Ryan's first feature film, "Fruitvale Station," a bittersweet biopic chronicling the last day in the life of Oscar Grant, a 22 year-old black man shot in the back by a cop on a train platform in Oakland, Calif., on New Year's Day 2009. The case became a cause célèbre because the killing was caught on camera by numerous passengers.

Here, Coogler talks about his critically-acclaimed writing and directorial debut, which has already won awards at both the Cannes and Sundance Film Festivals.

Kam Williams: Hi Ryan. I really loved the film. It's very powerful.
Ryan Coogler: Thanks so much, Kam. I appreciate your taking the time to watch it and to talk to me.


KW: Congratulations on winning at both the Sundance and Cannes Film Festivals. That's pretty impressive for a first-time filmmaker. Your picture's star, Michael B. Jordan, told me Fruitvale received a very long standing ovation at Cannes. What did that feel like?
RC: Just playing at Cannes was overwhelming, man. It was one of those moments I never imagined happening. I think a lot of the response was due to the audience's connecting to the cast. The performances were incredible! I really felt happy for my actors, especially Michael [B. Jordan], Melonie [Diaz] and Octavia [Spencer]. None of them had ever been to Cannes before. They were really moved to have their work embraced like that. And it was very moving to me how this story that I wanted to relate about a real event that had happened in my hometown managed to touched people thousands of miles away.

KW: What interested you in making the movie?
RC: The incident itself and what happened immediately afterwards in the Bay area, which is where I was born and raised. I heard about the tragedy almost immediately after it happened, because I was home on Christmas break from film school. Then it was on the news, and I still remember the first time I saw the footage on the internet. I was very emotionally affected by it. Everybody in the Bay was. There were protests and rallies and riots. I saw myself in Oscar. We were the same age, he looked like me, and we wore the same type of clothes. Seeing someone getting shot like that, and not getting a chance to say goodbye to his loved ones was painful. I couldn't imagine myself in that situation. With my being a filmmaker, I wondered whether there was a way I could do something. My mind immediately goes to that, whenever I'm affected by anything, since film is my outlet. Then, I saw how the incident got politicized, and how Oscar became a symbol, this icon, a martyr who had never done anything wrong in his life to some people, and how he was demonized by others as a criminal and a thug who got what he deserved. In truth, he was neither one of those things. He was just a normal person who had both flaws and good qualities. So, I wanted to tell his story from the perspective of the people he meant the most to and who knew him the best.

KW: Have you ever experienced racial profiling yourself?
RC: Yes, absolutely! The most recent situation happened one night while I was just minding my business, sitting in a car with a friend in Albany, Calif. The police rolled up on us and told me and her to get out of the car and sit on the wet sidewalk because there had been a robbery and I fit the description of the suspect. It was cold, and we had to just sit there shivering for about 30 minutes until I guess whoever it was that got robbed finally arrived and told the police from across the street that I wasn't the guy.

KW: What sort of research did you do prior to writing the script? Did you interview any witnesses? The police? Oscar's friends and family?
RC: I started by helping Oscar's family's lawyer organize some of the video footage that got turned in to the prosecutor's office for the trial. That was really comprehensive. Then I pretty much interviewed anyone who had a meaningful relationship with Oscar, all of his friends and family members. That's where the three-dimensionality of his character in the script came from. I was also able to bring the actors around his neighborhood, and they got to spend time with the characters they were portraying: his girlfriend, his mom, and the friends he was on the platform with the night he was shot. I based my decisions on all of that research.

KW: Did the police cooperate with the project?
RC: No, we left the cops alone. Most of them no longer work as police officers. They were only a very small portion of the film, and we had their court testimony, which we felt was enough.

KW: The officer who shot Oscar was only convicted of manslaughter. Your star, Michael, still characterized it as a murder. Which do you feel it was?
RC: To be honest, I think people can make up their own minds about the legal terminology. You can call it whatever you want, but regardless, a young man's life was taken unnecessarily. It's not for me to get caught up in the politics of it. What means the most to me is that he never made it back home to his loved ones.

KW: Why did you decide to paint a warts-and-all picture of Oscar Grant? Were you at all tempted to sanitize his image?
RC: No, I never was. It wouldn't have made sense to make a film about Oscar and not show the struggles he was dealing with.

KW: What message do you hope people will take away from the picture?
RC: To me, the film is a domestic story about this 22 year-old and his relationships. It is my hope that people will see a little bit of themselves in the characters. And with that, I hope it will trigger a little bit of a thought process about how we connect to and treat each other, whether strangers or those we're close to. Some people never come in contact with someone like Oscar, a young African-American male, at all. Their only access to his world is through media. So, I hope the film offers some insight for folks like that.

KW: Have you considered making a movie about the assassination of Oakland Post editor Chauncey Bailey by members of a Black Muslim sect, which is another story of national interest? I was writing for the paper at the time, and spoke to him just a couple of days before his murder.
RC: I'm sorry to hear that, man. I followed the case and know a lot about Chauncey, and was moved by what happened. Like I said before, whenever something happens in the community, I think about it in terms of my art form.

KW: You originally went to college on a football scholarship. How did you make the transition from jock to film student?
RC: Initially, I was majoring in chemistry and planning to become a doctor, if football didn't work out. But in a creative writing class, I had a professor who encouraged me to go to Hollywood and write screenplays. I thought she was a little crazy at first, since it came out of nowhere, but it stuck in my head. I later transferred schools, switched majors, and started taking a bunch of filmmaking classes. Then I went to USC film school for my graduate degree.

KW: Well, we're all glad you did, Ryan. Thanks again for the time and best of luck with Fruitvale Station during Academy Awards season.
RC: Thank you, Kam.