The Wolfpack Ventures to Vegas for Yetta Nudder Nutty Adventure

Kam Williams Special to The Skanner News
Published: 21 May 2013 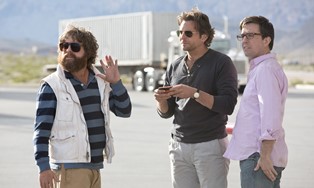 When we last left the wolfpack, the boys were over in Thailand for the wedding of Stu (Ed Helms) and Lauren (Jamie Chung). Of course, before the bride and groom could tie the knot (Justin Bartha), the men found themselves separated from Doug and suffering from amnesia following a wild night of partying on the seedy side of Bangkok.

But that was two years ago and now everybody has settled down safely into humdrum, uneventful lives in suburban Los Angeles. Everybody except Alan (Zach Galifiniakis), that is. He went off his meds recently which might explain such bizarre behavior as driving down the freeway with a giraffe in a trailer.

Since the 42 year-old goofball is unlikely to get hitched any time soon, another bawdy bachelor party is not on the horizon. However, when Alan takes a turn for the worse after his father (Jeffrey Tambor) passes away suddenly, his pals stage an intervention and decide to drive him to a mental health facility in Arizona for the help he desperately needs.

But before they arrive, their car is run off the road and Doug is kidnapped for ransom by Chow (Ken Jeong), the modestly-endowed, trash-talking mobster you should remember from Hangover episodes I and II. He and his henchman (Mike Epps) demand that the wolfpack retrieve $21 million in gold stolen from them by Marshall (John Goodman), a ruthless rival who stashed the bars of bullion in the walls of a mansion located somewhere in Tijuana.

That is wacky point of departure of The Hangover Part III, a supposed trilogy finale which is an improvement over the decidedly derivative prior installment yet still pales in comparison to the zany original. At least you don't develop a nagging sense of déjà vu watching this screwball adventure, even if it isn't exactly laugh out loud funny.

The madcap antics take Phil (People Magazine's reigning Sexiest Man Alive Bradley Cooper) and the rest of the road warriors south of the border and then on to Las Vegas, the place where it all started, for another round of raunchy male-bonding rituals. Stu stumbles upon his ex (Heather Graham) and Alan crosses paths with the woman of his dreams (Melissa McCarthy), a big hint that the trilogy is destined to be stretched into a fourple.

A nutty kitchen sink comedy ending on a cliffhanger designed to keep diehard fans of the depraved franchise in suspense about whether yetta nudder sequel might be in the works.