Video: Kevin R. Free on the Dynamics of Race (And Eating) in Portland

By Helen Silvis of The Skanner News
Published: 24 April 2013

Kevin R. Free is starring in Portland Center Stage's production of Clybourne Park. Free says the production, directed by Chris Coleman is one of his best experiences as an actor.

A comedy about race and gentrification, Clybourne Park is midway through its run at the Portland Armory, 128 NW Eleventh Ave. Performances are Tuesday through Sunday until May 5. And each weekend matinee is followed by a 20-minute, post-show discussion. Tickets start at $39 with discounts for students and youth under 25. Box Office: 503-445-3700

Free talked to The Skanner News about why he loves Clybourne Park, acting, and eating out in Portland. Check out his website here and follow him on twitter @KevinRFree


Where did you grow up?
Mostly in Greensboro, North Carolina.  I'm an army brat. My dad was in the army for 20 years. I was born in Hampton Virginia, and then we lived in Fort Rodney, Kansas, and outside Chicago and Fort Knox, Kentucky, and finally ended up in North Carolina both in Greensboro and then in Fort Bragg. So I call North Carolina home because that's where my father and stepmother still live, and it's where I spent most of my years since I was six years old.

Where do you live now and do ever think of moving?
I live in New York City. I love Portland. I have loved being here. It's so beautiful and I love to eat, so I love all the food here. I have thought about moving while I have been here working, and my partner wants to move out here, but I don't think I am finished in New York yet. When I think about moving I think about how I'm going to work. In New York I have so much opportunity to do other things and I have a theater festival there. So I'm not ready to move yet.

Where do like to eat in Portland?
Close to where I'm staying in downtown Portland is Lardo Pdx., I really love to eat there. And I love Irving Street Kitchen. My favorite happy hour is at Clyde Common on SW Stark. I love Tasty n Alder and the cast likes to go there a lot.  I had a delicious sandwich at Lovejoy bakery. I had a really great lunch at Little Bird. I loved Oven & Shaker. I've been everywhere. When I came I had a list of places I had to go to.  I think I've been to all except one. 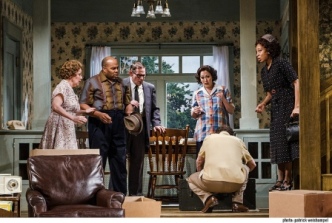 What's the best thing about being an actor?
For me, one of the greatest things about being an actor, is learning new things about being an actor. I always tell people, if you want to hire someone and you want them to be subtle, you probably don't want to hire Kevin R. Free—cos I'm not subtle.  But Chris Coleman who directed this play was so masterful and so specific about what he wanted that I think I have a couple of subtle moments in this play. I'm excited to learn what that feels like. And it doesn't feel like lying. It doesn't feel untruthful. I keep meeting these new tricks and I'm such an old dog. So I feel great and fortunate that I can still meet the challenge.

How did you get your leading role in Clybourne Park?
My manager called and said Portland Center Stage wanted me to do a video audition for the play. I said yes, but I told him to wait, because I knew my friend Rodney Hicks, who's a new Portlander, was going to play the role. So I emailed Rodney to make sure that it was OK with him, because I didn't want to take his role. He wrote back and said he said 'No, I recommended you because I'm not going to do the role.' So I said, great and sent the tape. And they offered me the part.

Can Clybourne Park really be about gentrification and be funny?
It is funny. It's very funny. One of my favorite things about this play is that when you see Black people on stage in plays that deal with difficult topics and race, generally we're making noble decisions. In this play, across the board, we are all making really bad decisions.
I think the play is a good play for Portland. I've been researching Portland's racial dynamics. And I've been surprised about how every night when we do our talkback after the play, how moved people are to talk about it. This play doesn't tie everything up with a bow, which is very much like racial dynamics all over this country. Conversations leave us feeling ashamed and embarrassed and angry and sad. And I think that is what this play does— in a brilliant way. But it also is a very, very funny piece. So you're kind of massaged along the way.

Of all the plays I've been in, this is one of the ones that is most worth seeing.

Are You Writing Now?
I am. I try to write a little bit every day. I can't tell you about it because I find that when I talk about them I lose a little bit of enthusiasm. But the things I am writing about are very inspired by my time in Portland. 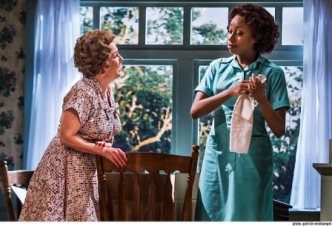 Your mom died when you were just a kid and you went to therapy to deal with that grief later? Does therapy help and would you recommend it?
Yes I would. I love the therapeutic relationship. Once you find the right therapist – because that is a job in itself –once you find the right therapist, being able to tell someone who is a stranger to you everything– and they have to listen to it - is great!

I know somebody who was seeing a therapist for the first time, and he said the therapist had asked him some questions. And he said, "I don't know who he thinks he is, asking me these questions. He doesn't know me like that."

And I said, "Well no, he doesn't. That's why he is asking you these questions."

You're also write plays including,  "A Raisin in the Salad: Black Plays for White People." Why?
Well I love that play. It's a play about an artist and that artist happens to be Kevin R. Free. It's about a playwright who writes Black plays, but they are not Black plays they are parodies of Black plays, written for White people to perform and enjoy.

At the beginning of the play the artist tells the audience "This is the last time you're going to see my Black plays for White people. I want a new expression and I don't want to write this way anymore." This is the first time the cast has heard this, and his characters revolt and take over the show. And they kick Kevin R. Free out of his own world.

It's about me and a time in my life where I was putting myself in a box. It's about a persona I had created for myself, and about letting that go. So by the end of the play Kevin R. Free has changed very much.  I wrote it as a reminder to myself to take responsibility for what I put out there artistically.

In a couple of weeks you'll be able to find it published on the website indietheaternow.com