'The Kill Hole:' Screenwriter, Film Director Mischa Webley on His Art and Career 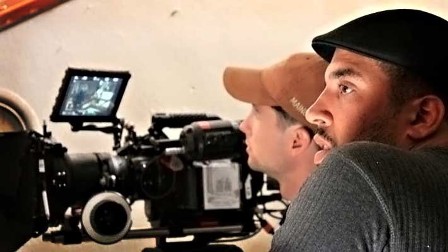 Filmmaker Mischa Webley, a Portland native, has a new film out starring Chad Boseman. You read that right. "The Kill Hole," released last week in DVD, is the story of an Iraq war veteran plagued by memories of the war, working as a cab driver in Portland and going to a support group. He is approached by private military contractors with an offer he can't refuse: track down and kill a rogue military veteran hiding in the Oregon mountains.

The Skanner News hooked up with Webley to ask about his work as a director and screenwriter, as well as his view on what it takes to break into the film industry.

The Skanner News: What drew you to filmmaking?

Mischa Webley: I've been writing short stories and fiction since I was in grade school, and I grew up watching all sorts of movies with my dad, who was a big film buff. At some point, the two dovetailed and I realized that people also write and make movies and I thought, "I can do that." So I started teaching myself how to write screenplays and direct, and I've been doing it since.

TSN: Is there someone who inspires you in your art more than others?

Webley: I'm really inspired by other filmmakers actually, whether its an independent filmmaker in Nowhere, USA, going into debt to see his dream come to life (I don't recommend that though) or it's a famous director like Stanley Kubrick, giving everything he has to get it right on screen. Films are just so hard to make you almost have to force them into existence, so any movie you see - good or bad - started with someone just having the idea and the will power to do it, just because they want to see a certain story come to life. For no other reason than that they just want to. And that's inspiring to me.

TSN: A lot of people think: Yeah, I'd like to be a director.  But what are the obstacles?

Webley: On top of being so expensive, and requiring so many people for even the smallest film, it takes a lot of stamina to really get through because it just takes so much time. It's been four years since I wrote this film, and it was a constant challenge while writing, shooting, editing, and releasing the film to just make sure that I'm telling the same story in all those different stages, that what ends up on screen is the same story I set out to tell.

TSN: Do you have advice for young people who might be thinking that filmmaking is their passion?

Webley: Filmmaking is like anything in life: if you work hard, put your heart into it and stay focused, it will pay off eventually. But you need to be patient. I set out to make films when I was a teenager and thought I'd make a feature within a year or two. It took thirteen.  So I guess my advice is to just keep at it and don't ask for anybody's permission. Everybody will tell you you need this amount of money, or need to go to film school, or use this camera to make your movie. But you don't. There's no right way to do it. What's important is to just make whatever movie you can at the time, whatever way you can, learn from it, and then do it again until it works out.

TSN: What are you going to do next?

Webley: I'm getting ready to launch my own production company and get my next feature film off the ground with a script I've already written. In the meantime, I'm freelancing on some shorter projects and working on the script for another project.