A new documentary "Bare As You Dare" profiles some of the people who ride naked through the streets of Portland. The documentary showcases some of the most "unlikely-to-get-naked cyclists" as they take off their clothes and prepare to join thousands of others on the Portland World Naked Ride. From a cancer survivor to a reserved homebody, the subjects of the documentary share their personal stories and answer the big question —Why? 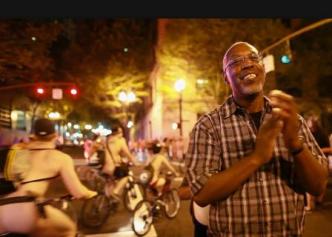 Filmed by Ian McCluskey and a crew of assistants from N.W. Documentary the film will show for the first time at the 11th Annual Filmed by Bike event, April 20-23 at the Clinton Street Theater in Portland.


Showtimes are: 7 p.m. on April 21 and April 23.
The film is part of the Bicycle Dreams Program, a mix of short films under eight minutes long.
Filmed by Bike is a film festival of bicycle movies from around the world. The festival runs April 20-23 at the Clinton Street Theater, 2522 SE Clinton Street in Portland.
The 2013 festival will kick off with the New Belgium Street Fest from 3-9 p.m.  Saturday, April 20. Free and open to everyone of all ages, the event includes Bollywood–style music from DJ Anjali and The Incredible Kid, the Love Bomb GoGo marching band, a video confessional booth, beer garden, food and more.


Bare as you dare trailer