Video: 'The Abolitionists' Screens on PBS This Month

By Helen Silvis of The Skanner News
Published: 07 January 2013 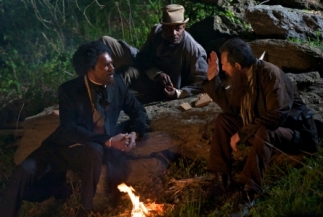 PBS will air a three-part  history series on the struggle to end slavery, starting at 9 p.m. Jan. 8, and continuing in Jan. 15 and Jan. 22. The Abolitionists tells the story of this critical period in American history, by dramatizing the lives of anti-slavery campaigners:  Frederick Douglass and William Lloyd Garrison, along with Harriet Beecher Stowe, John Brown and Angelina Grimke.
Richard Brooks, who viewers might know from his role as Assistant District Attorney Paul Robinette on Law and Order makes a very credible and likable Douglass, and Neal Huff does the same for Garrison. Using dozens of photos and documents from the period, the series gives attention to the struggles and achievements of the ordinary people –Black and White— who made up the movement, as well as to its leaders.
Four years in the making, the series initially focused on just two characters, Douglass, the escaped slave who became one of America's first and best-known civil rights pioneers; and Garrison, a White printer and pacifist who founded the anti-slavery newspaper, "The Liberator."

Rob Rapley, the series writer and director, said by focusing on the relationship between Douglass and Garrison, the series offers us a different and more intimate understanding of both the men and the abolition movement.
"It illustrates the eternal tension that exists in social reform movements between words and guns," Rapley says.  "You see that tension during the 1960s and in just about every reform movement."
Garrison, who worked against slavery for almost 40 years, identified himself as an "ultra peace man," a pacifist who believed that justice would be achieved through persuading people that slavery was immoral and against God's will. Douglass was a pragmatist who wanted change, and was more open to the use of force to achieve it.
"He didn't involve himself in violence," Rapley says. "But he didn't criticize it like Garrison did."
Series producer Sharon Grimberg says the two men, "are among the greatest civil rights activists in American history. They opened the eyes of thousands and put their families at risk to erase the sin of slavery. They had tremendous respect for each other and stood together for many years before, sadly, having a bitter falling out.
"Though they never fully reconciled, the ties between the two ran deep. When Garrison died, Douglass wrote a eulogy of his former mentor that was transcendent and profoundly moving."
But while Douglass and Garrison dwell in the heart of the story, Rapley realized other characters were needed to show the depth and breadth of the anti-slavery movement. After much thought and discussion, he decided to include the stories of early feminist Angelina Grimke, (Jeanine Serralles ) author Harriet Beecher Stowe, (Kate Lyn Sheil ) and the radical fighter John Brown (T. Ryder Smith).
Grimke was a Southern slave owner who left the South to campaign for freedom  and scandalized some by speaking out in a very "unladylike" fashion.
"She was one of the first women to ever speak to audiences that included men," Grimberg says. "And she gradually began connecting her belief in the rights of Black Americans to the rights of women, causing great upheaval within the anti-slavery movement."
Beecher Stowe was the movement's propagandist, writing her anti-slavery novel Uncle Tom's Cabin to overcome grief over the loss of her son.  And Brown exemplifies the militant wing of the anti-slavery movement, who believed that violence was justified to overcome the evils of slavery.
Brown eventually was hanged after leading a raid on a Virginia  armory, but Douglass never turned his back on his friend, Rapley says.
"He stayed at Brown's house for months on end," Rapley said. "And he always spoke highly of him."
The Emancipation Proclamation, issued Jan 1, 1863, celebrates its 150th birthday this year. But while the end of slavery may look inevitable with hindsight, that is certainly not the case.
"In 1829-30 the end of slavery was anything but inevitable," Rapley says. "Slavery was was sanctioned by the Bible, written into the constitution and there was barely an acre in the world where slavery was illegal."
Even Lincoln's role looked a lot less certain then. Lincoln didn't start out as an abolitionist, Rapley reminds us.
"He had to come to it very painfully. As late as a month before he signed the Emancipation Proclamation, he was offering a deal so that any Southern state that would lay down its arms could keep its slaves until 1900."
"The Abolitionists," was produced by American Experience, the team that also made the acclaimed, Freedom Riders series. Many of those series can be watched online at the series website.