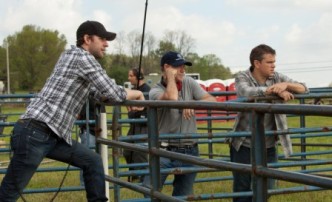 In 2011, a disturbing documentary called Gasland was nominated for an Academy Award in the Best Documentary category. That eye-opening expose' chronicled how energy companies had duped landowners in Pennsylvania and Colorado into signing over the drilling rights on their property while downplaying the ecological risks.

For hydraulic fracturing, AKA fracking, the process employed to mine natural gas, has contaminated many a community's environment, thereby rendering homes virtually uninhabitable. In that movie, victims demonstrated with a match how their tap water had become flammable, and how their pets had inexplicably turned sickly and started shedding fur in patches.

Ostensibly inspired by Gasland, the Biblically-titled Promised Land is a cautionary tale tackling the same theme. This modern morality play reunites director Gus Van Sant with Matt Damon for their fourth collaboration which began back in 1997 with Good Will Hunting. The pair also worked together on Finding Forrester in 2000 and on Gerry a couple of years later.

Here, Damon stars as Steve Butler, a farm boy-turned-itinerant corporate pitchman employed by a gas conglomerate to fast-talk country folks into turning over their drilling rights. He and his partner's (Frances McDormand) latest assignment takes them to McKinley, a cash-strapped, if otherwise idyllic, rural community that stands to be polluted if tricked into signing on the dotted line.

Steve has a down-home way of insinuating himself with the locals which even turns the head of a pretty schoolmarm (Rosemarie DeWitt). Fortunately, a couple of gadflies in the ointment emerge in a skeptical science teacher (Hal Holbrook) and an outside agitator (John Krasinski) who urge everybody not to be blinded by dollar signs, but to do a little research into the potential fallout from fracking.

A transparent message movie which might deserve to be forgiven for moralizing and politicizing, given the urgency of the underlying environmental issue.