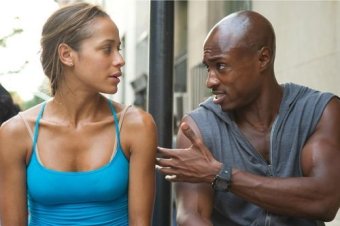 Traffic is so congested in Manhattan nowadays, it's hard to see that terminally-gridlocked terrain as a viable setting for high-octane chase scenes. Yet, that is precisely what we have in Premium Rush, an adrenaline-fueled adventure revolving around the derring-do of daring bike messengers who dart between cars and dodge pedestrians to make their deliveries.

At the film's point of departure, we're introduced to several staff members of a bonded company called Security Courier. Employee of the Year Wilee (Joseph Gordon-Levitt) is a Columbia Law School graduate who prefers this liberating line of work to being stuck sitting behind a desk in a business suit every day.

Similarly, his gorgeous girlfriend, Vanessa (Dania Ramirez), sees it as a refreshing alternative to waiting tables in a restaurant. However, one hazard of the job for her is having to fend off the sleazy overtures of fellow messenger, Manny (Wole' Parks), and of their equally-flirtatious dispatcher, Raj (Aasif Mandvi).

Nonetheless, this picture is more about action than romance, and the fun starts soon after Wilee accepts an assignment to transport an envelope designated "Premium Rush" from his alma mater to Chinatown. But before he even has a chance to leave campus, a gentleman (Michael Shannon) identifying himself as the Dean of Students asks permission to take possession of the parcel.

Wilee's suspicion is aroused when Dean Ackerman inexplicably goes ballistic when denied. And that concern escalates to fear when the guy starts frothing at the mouth and gives chase by auto, running lights and driving against traffic.

The plot thickens further when the pedal-pushing protagonist stops at the police station to report the attempted theft. There, he discovers that he's on his own because Ackerman, lo and behold, is ostensibly a crooked police officer with a hidden agenda and a pecuniary interest in hijacking the package.

Like a compelling cross of Crank (2006) and 16 Blocks (2006), Premium Rush unfolds at a breakneck pace that doesn't give you a chance to pause and wonder whether what you're watching is even credible. But nothing else matters when such an urgent roller coaster ride, or should I say bike ride, manages to keep you on the edge of your seat for its dizzying duration.

The Big Apple as the congested setting for a Tour de Gridlock!

In English and Mandarin with subtitles.

DVD Extras: The Starting Line: Meet the Cast; and Behinds the Wheels: Action, Stunts and Chases.