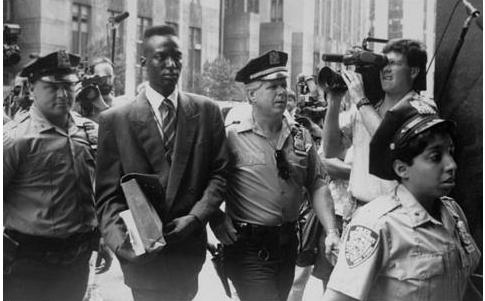 Around 9 PM on April 19, 1989, a 28 year-old, female jogger was brutally beaten, sexually assaulted and left for dead in a wooded area of Central Park located off the beaten path. Because she was an investment banker with an Ivy League pedigree, the NYPD felt the pressure to apprehend the perpetrators of the heinous crime ASAP.

Within hours, cops had extracted confessions from Anton McCray, Kevin Richardson, Korey Wise, Yusef Salaam and Raymond Santana, Jr., teenagers who had been denied their right to an attorney. Although none of the five had ever been arrested before, they were all convicted of rape and attempted murder on the strength of those incriminating admissions alone.

Part of the explanation for the legal lynching was that the victim was a wealthy white woman while the accused were poor black kids from Harlem. The press was all too willing to exploit the hot button issues of color and class, and the media sensationalized the case's lurid details, coining the term "wilding" to describe the alleged behavior of the defendants.

Real estate magnate Donald Trump even took out full-page ads in every New York City daily newspaper, calling for the death penalty and saying that the boys "should be executed for their crimes." In the face of the vigilante-like demand for vengeance, no one seemed concerned that the suspects' DNA failed to match the only semen found at the scene.

Sadly, they were only exonerated in 2002 after having completely served sentences ranging from 6 to 13 years when Matias Reyes, a serial rapist whose DNA was a match, confessed to the crime because of his guilty conscience. This gross miscarriage of justice is recounted in The Central Park Five, a riveting documentary co-directed by the father-daughter team of Ken and Sarah Burns.

The film features reams of archival footage, including videotapes of the framed quintet's coerced confessions. Mixed in are present-day reflections by them, their lawyers, and relatives, as well as by politicians, prosecutors and other pivotal players.

A heartbreaking expose' about a rush to judgment which ruined five, innocent young lives.