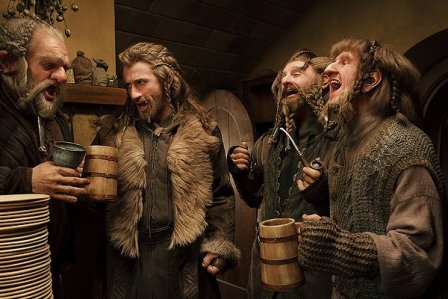 The Hobbit: An Unexpected Journey (PG-13 for epic battle scenes and scary images) Peter Jackson (The Lord of the Rings trilogy) directed this adaptation of J.R.R. Tolkien's fantasy novel about a human-like creature with furry feet (Martin Freeman) who is prompted by a wizard (Ian McKellen) to embark on an epic with 13 dwarfs to wrest control of a lost kingdom from the clutches of a fearsome dragon. With Richard Armitage, Ken Stott and Graham McTavish.

Jason Becker: Not Dead Yet (Unrated) Documentary demonstrating the indomitability of the human spirit about a once-promising rock & roll prodigy who is still making music 22 years after being diagnosed with Lou Gehrig's disease.

Let Fury Have the Hour (Unrated) Counter-culture documentary chronicling how a generation of outspoken artists began challenging the status quo in reaction to the rise of conservatism in the Eighties. With appearances by comedian Lewis Black, rapper Chuck D., playwright Eve Ensler and novelist Edwidge Danticat.


Save the Date (R for sexuality, profanity and brief drug use) Romantic comedy about a young woman (Lizzy Caplan) who turns to her sister (Alison Brie) for support when she rushes into a rebound relationship right after declining her boyfriend's (Geoffrey Arend) marriage proposal. With Mark Webber, Martin Starr and Melonie Diaz.

Saving Grace B. Jones (R for violence and brief sexuality) Tatum O'Neal plays the title character in this psychological thriller, set in Missouri in the Fifties, about a couple (Michael Biehn and Penelope Ann Miller) whose quiet life turns chaotic when the husband's sister comes to live with them after being released from a mental asylum.  With Piper Laurie, Liberty Smith and Evie Thompson.

Yelling to the Sky (Unrated) Dysfunctional family drama about a bi-racial 17 year-old (Zoe Kravitz) forced to fend for herself in a rough neighborhood due to an absentee mother (Yolonda Ross) and a father (Jason Clarke) given to violent mood swings. With Gabourey Sidibe, Tim Blake Nelson, Antonique Smith and Adam Tomei (Marisa's brother).