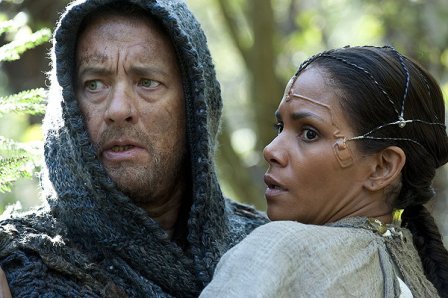 Based on David Mitchell's groundbreaking novel of the same name, "Cloud Atlas" offers an intriguing and visually-captivating cinematic experience that's well worth the investment for its unorthodox narrative alone. Be forewarned, however, that you would be well advised to arrive at the theater already familiar with the cryptic best seller's inscrutable plot structure, if you hope to have a decent idea about what's going on.

Since I hadn't read the British Book Award-winner, I initially found myself quite baffled by the surrealistic saga's elliptical storyline. Still, I was able to enjoy it immensely after gradually discerning the underlying method to the time-shifting madness.

It essentially consists of a half-dozen insular adventures which ultimately interlock despite unfolding over the course of past, present and future eras. They transpire in locales as far afield as a Pacific atoll in the 1840s, Cambridge, England in the 1930s, San Francisco in the 1970s, current-day London, Korea in the 2140s and a post apocalyptic Hawaii in the 2340s. Meanwhile, their equally-diverse themes range from slavery to gay love to corporate mind control.

It took a collaboration by a trio of noted directors, Tom Twyker ("Run Lola Run") and Andy and Lana (formerly Larry) Wachowski ("The Matrix"), to execute this ambitious, $100 million, big screen adaptation. In addition, the principal cast members, including Oscar-winners Tom Hanks (for "Philadelphia" and "Forest Gump"), Halle Berry (for "Monster's Ball"), Susan Sarandon (for "Dead Man Walking") and Jim Broadbent (for "Iris"), each play multiple versions of reincarnated characters.

Nonetheless, Cloud Atlas is as much a morality play about human fears, frailties and failings as it is a mind-bending sci-fi mystery. For, while you're busy deciphering complicated clues, the picture intermittently indulges in pretentious fortune cookie philosophy prompting reflection upon the deeper meaning of life.

Hence, the dialogue is needlessly diminished by preachy poster speak like "Separation is an illusion," "To know yourself is only possible through the eyes of another," and "From womb to tomb we are bound to others" designed to hit you over the head with a simplistic New Age message. Another minor flaw is the film's almost three-hour running time, which can easily be explained by the directors' desire to remain as faithful to the 544-page source material as possible, rather than conflate characters, condense chapters and make other concessions for the sake of a Hollywood formula.

A cleverly-concealed, centuries-spanning headscratcher constructed with fans of the original sextet of stories in mind.

In English and Spanish with subtitles