Dante James is an Emmy Award-winning independent filmmaker who has produced and directed critically-acclaimed documentary and dramatic films. He is also the assistant director of the African Cultural Center at North Carolina State University (NCSU).

Prior to joining the faculty at NCSU, he was an Artist in Residence and Instructor at Duke University. In 2006, he won a National Emmy for his work as series producer of the well-received PBS series, "Slavery and the Making of America." James' most recent offering, "Harlem in Montmartre: A Paris Jazz Story," was awarded Best Documentary at the 2010 Pan African International Film Festival in Cannes, France.

In 2008 he wrote, produced and directed "The Doll," an adaptation of a classic short story by Charles W. Chesnutt. That picture received the Best Dramatic Short Film Award at that year's Hollywood Black Film Festival.

Earlier in his career, Dante executive produced the PBS series, "This Far by Faith" for Blackside Films in Boston, Mass. He was also honored with the DuPont Columbia Silver Baton for his work at Blackside.

During the summer of 2010 he served as a guest lecturer at the University of Cape Town in South Africa. And he plans to return to Cape Town to make a film with a black South African resident of the Khayelitsha Township. A member of the Directors Guild of America and the Writers Guild of America, Dante is currently developing an independent feature-length documentary about Huey P. Newton and the Black Panther Party.

Kam Williams: Hi, Dante, thanks for the interview. How ya been, bro?

Dante James: Hi Kam, thank you for your continued interest in my work.  The last few months have been really busy. I'm enjoying my responsibilities as assistant director of NCSU's African-American Cultural Center and all of my film projects. The independent feature and, of course, the feature documentary on Huey P. Newton and the Black Panther Party are moving forward.

KW: What interested you in doing a documentary about Huey Newton? 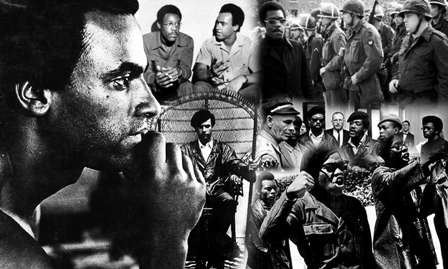 DJ: As a young person, I was interested in the Black Panther Party and their efforts to serve the needs of the community while also having the courage to confront oppressive exploitative forces in the community.  That interest grew as I got older and, as you are aware, all of my films explore some aspect of the African American experience. So, a film on Huey P. Newton and the Black Panther Party is an opportunity to grow intellectually while also exploring an often misrepresented movement.

KW: Do you think that the Panthers have been slighted by history because J. Edgar Hoover was so successful at destroying the Party?

KW: How did you get David Hilliard to participate in the project?

DJ: Actually David who was Huey P. Newton's childhood friend, a founding member of the Party and its Chief of Staff, approached me. David also led the Party during the time that Huey and Bobby Seale were incarcerated.  David and I spent several months talking about the film in terms of a conceptual framework at the same time that I conducted my own research. During these conversations David would tell me these incredible stories about Huey's vision for the party, the inner workings of the party, the mistakes they made, the successful maneuvers, and the pain and agony of the murder of Party members. One of the main misconceptions of the party is grounded in the concept of armed struggle. While there were factions of the party who pushed an armed struggle agenda, that was not Huey's vision. This was a leading source of tension within the Party and it will be a major story focus of the film.

KW: What about Bobby Seale, who I think of as the only other surviving founder of the Black Panthers?

DJ: I haven't had a chance to speak to Bobby Seale yet. I have been working very closely with David Hilliard and I'm thrilled to have the support of Fredrika Newton, Huey's widow and the president of The Dr. Huey P. Newton Foundation. Of course, we want to and will speak to Bobby Seale but the story of the Black Panther Party, in essence, is the story of Huey Newton. Huey had his own personal issues. He was complex, he was brilliant, and he was a student of history, politics and economic theory.  Clearly, Huey P. Newton was the leader and standard bearer of the Black Panther Party.


KW: What sort of archival footage will you have access to?

DJ: David was very forward thinking in terms of the legacy of the Black Panther Party. He has every issue of the newspaper, hours of unseen film footage and unheard audio recordings, documents and correspondence.  It's these materials that will facilitate our efforts to tell the story of Huey Newton and the Black Panthers from inside the Party. To that end, we need support from the public to raise the development funds to catalogue these materials and to have film footage cleaned and transferred to a digital format. We are asking that conscious and critical thinking individuals go to Kickstarter.com and contribute to the project. It is essential that people contribute today because we only have 21 days left to raise the development funds.

KW: Will you also be looking at documents made available by the Freedom of Information Act proving the U.S. government's infiltration of and war on the Panthers via the FBI's Cointelpro program?

DJ: Another major story line is the violence and oppression of the Black Panther Party under the auspices of the Cointelpro program. David Hilliard actually led the party during the most violent assaults by the FBI because both Huey Newton and Bobby Seale were incarcerated. David obviously has first had knowledge of this time period and his knowledge will be supplemented with Freedom of Information Act documents.

KW: How many original Panthers are still around to interview?

DJ:  I'm not certain how many original Panthers are still around but David's brother, June Hilliard, and Huey's older brother, Melvin Newton, will be essential to the storytelling. Additional contributors include, but are not limited to, Elaine Brown, who led the BPP during Huey Newton's exile, and Fredrika Newton. Other key people are Che Billy Brooks, Minister of Education of the Chicago Chapter, Larry Little, the leader of the Wilmington, North Carolina chapter, and Kumasi Simmons the foremost authority on George Jackson and the prison movement.

KW: Do you know yet what, besides Huey, will be the primary focus of the film?

KW: Will you be discussing the New Black Panthers? When I interviewed Bobby Seale, he was furious that they've appropriated the name, because he sees them as having a totally different agenda.

DJ:  David Hilliard and the Huey P. Newton Foundation have no connection to the New Black Panthers.

KW: What do you want people to take away from the movie?

DJ:  We want young people to know that Huey P. Newton and the Black Panthers were very young. They were in their twenties but they had the courage to confront oppressive forces and struggle to make America live up to its promise of equality and justice for all its citizens. We want young people to know that it is now their responsibility to carry the struggle forward. And, of course, I think it is paramount that the Black Panther Party be afforded an opportunity to define themselves and their movement outside of the mainstream, corporate-controlled media.


KW: How long will it take you to complete the project?

DJ: Once we secure production financing, it will take 12-14 months to make the film. But the most pressing challenge is to secure the development funds so, again, I ask that people go to Kickstarter.com today and contribute to the project.

KW: How much more money are you looking to raise?

DJ: The production budget is $700,000 dollars, which is not a big budget for a feature documentary film. We are exploring possibilities with private investors because this film and this story cannot be conformed to the artistic, editorial and content standards of broadcast outlets, corporations, and foundations. In the context of a business venture, our research indicates that the film will have strong domestic and international market appeal. So, I want it to be clear that we are seeking investors not funders.  Investors can fully expect a return on their investment.

KW: Dante Lee, author of "Black Business Secrets," asks: What was the best business decision you ever made, and what was the worst?

DJ:  My best decision was to starting to put money away for retirement at an early age. My worst decision was not taking advantage of an opportunity to invest in the stock market as a teenager.

DJ: That everyone who reads this article go to Kickstarter and support the film. And that people who have the resources will realize how important it is to define our own history, tell our own stories, and invest in this film.

DJ: Trying to keep up with my late older brother Mike, who grew up to be a brilliant artist and passed away much too soon.

DJ:  That's easy, a black panther, because I respect the commitment and courage of the Black Panther Party. But I could also see being a thoroughbred racehorse. They are an interesting mix of power, speed, agility and beauty.

DJ: When know that my family is happy and secure and when I'm working on a film.

KW: Thanks again for the time, Dante, and best of luck with the film.

DJ: It's been great talking with you, as always, Kam.