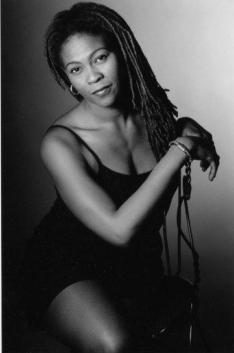 Stunning Portland theatre fans with her incredible voice and talent, Chicago-born actress Chavez Ravine stars with Lena Kaminsky in "Black Pearl Sings!" The play by Frank Higgins tells the story of a 1930s music scholar who strikes up a relationship with an incarcerated singer, Pearl, to mine her family history. The show is a musical tour de force for Ravine, who is performing with PCS for the first time.

In a related story, the Red Door Project is holding theatre chat sessions on women and race, June 10 and 17, after the Sunday matinee performances; more details are below.

The Skanner News spoke with Ravine about her career, her music, and "Black Pearl Sings!" The show runs through June 17, but you should get tickets as soon as possible because the final two weeks are already starting to sell out.

The Skanner News: Late last year Portland Center Stage mounted an all-Black production of "Oklahoma!" Right now, alongside "Pearl," PCS is showing "It Ain't Nothin' but the Blues." How is it that PCS seems to be squarely raising issues of race these days?

Before I even accepted the job I looked through the theatre. When I saw "Oklahoma!" – that was huge, that was big. As a little girl growing up in Chicago – I was one of the few girls – I'd venture to say the only girl of color – watching "Oklahoma!" and Doris Day and all these musical numbers and thinking: I'm going to do that one day.

TSN: What is the play about?

CR: "Black Pearl Sings!" is about two women who find themselves stuck in one way or the other – one who's stuck in prison trying to find her daughter; so not only is she stuck by the system, she's stuck by racism and being incarcerated.

And the other, the white woman, Susannah, is a woman stuck in a man's world who can't seem to break the ceiling of wanting to be an educator, wanting to be an academic in her profession, but not being taken seriously.

And they find each other because one is a song collector, she's been a song collector for quite some years, and she's honed in on trying to find a song that links to Africa. She finds Pearl – or Alberta Johnson – who may be the link she's trying to find because so much history was lost in the transatlantic slave trade.

TSN: One of the things that strikes me about this plot is that happens in the modern day music industry too.

CR: I think that's very, very true. Even the story that it's kind of loosely based on, which is the Lomax and Lead Belly story, even back then  -- not being well educated, they didn't know the business aspect of their talent. And they weren't equipped to sign contracts, read contracts and know what they were getting into.

And up to this day it amazes me when I hear a singer like Toni Braxton – who basically lost all her money not knowing that she was tapping into her own savings when she was fronting all these airline trips, going to hotels. She thought the music company, the record company, was fronting the bills. No – it's coming out of your pocket. When she left her management company – I think it was BabyFace – she had no rights, she had no rights to her songs – she had no rights to anything she had done with them except to sing them onstage.

TSN: Talk a little bit about your own career.

CR: Well I grew up in the church. I don't consider myself a gospel singer. I had some training. I think I'm better suited for storytelling in my music. The brief moment when I though I wanted to be a recording artist was very brief. But when I found theatre, that's what really caught my attention.

There was one thing that almost kept me from being an artist – because my educational background is business, so I went to college for business, but I found myself going back to theatre or music or being on the floor where the musicians were.

But I remember in high school I was up for "West Side Story." No one had ever heard me sing and they didn't know I could sing – shy and awkward, most artists are. There was a wonderful new theatre teacher we had who was going to revolutionize what we were doing. It was an all girls' school, Notre Dame School for Girls. And it was predominantly Irish. When they heard me sing the teacher was going to give me the part of Maria. And the nuns called her in and they said, I don't think we're ready for that yet. Because as a minority at the school, they thought it would not be appropriate. And that kind of shut me down for a long time, so I always thought I should have business as my main focus.

It's kind of what your parents tell you – get a real job, get a real degree, that's a God given talent, you'll always have that. And so I started thinking along those lines but everything kept pulling me back towards the arts.

I shut that down for a long time. And then a girlfriend said I should probably go and study at the Piven Theatre Workshop. And I studied at the Piven Theatre Workshop where Byrne Piven and Joyce Piven were my mentors -- their son and daughter Shira Piven and Jeremy Piven from " Entourage," the HBO show. Byrne said, "You have what it takes – so just keep moving, keep moving forward." A little guy with a big voice. So that was my start in theatre and through him I've been around some incredible actors – Aiden Quinn, Joan Cusack – I met some incredible people and was able to get good feedback and keep it going.

TSN: Going back to the show, I've heard many people gossiping in hallways about what a great show this is – and people are raving about your music. Where does your voice come from in this plot where your character is potentially being completely ripped off – you're pouring your art into a place that may not be worthy of it? How do you pull this off onstage?

CR: I try to hear the voices of the people from that era, and I have to channel them into the character. For them I think it was about expression, and just needing to express – and whoever's listening in on that expression just happens to be listening in. It feels like it's something that just has to happen.

I remember as a girl we had a summer house in Memphis, and there was this guy who walked around with a guitar because that's just what he did; I mean we call them street musicians now. But in the South that's just the way it was. Or you had a guy on Beale Street who's sitting there plucking his guitar just for the sake of doing so. Not necessarily wanting anything for it, or wanting you to drop a dollar – it's nice that you do, but he's just doing it because this is what he has to do to express himself. That's where it comes from.

I think that's a difference between this person and this character, versus some other musicians. They didn't know when they were being used, or they just trusted someone too much. And I don't put this woman in the position of over-trusting: she gives to get and she gets to give.

TSN: Another theme in this show is incarceration, the prison system, what it means symbolically and literally. Talk about that.

CR: I think that for this particular woman she did what she had to do – and you'll find out when you come to see the show. When do you plan on coming?

But it gives us a little window into the over-incarceration of people of color, African Americans in particular. It's what they term slavery by any other name – so it's basically using women or using the chain gang to find a way to build roads, clean swamps, lay bricks – things like that. Even with women it was done to "help build America." Whatever she had done, even just being on the street – especially at that time, in the 30s – you could get picked up for anything and be used as a laborer. And that's free labor.

TSN: What would you like to know that people are taking away from this show?

CR: I really hope that this play inspires and empowers people to look beyond our skin color, and know that nobody is going anywhere – whether we're gay, straight, black, white, brown, yellow – we're not going anywhere and I think we need to learn how to play fair. Bottom line.

I think that's the most important thing, that people come away with a sense of reflection. What they see in the beginning with this woman Pearl is not where she ends up.

I can feel in the room, as the show moves forward, the audience starts to see her as a human being. Because when she first enters it's a little daunting, and it should be. Here is a woman in chains, and I think that should do something to everybody in the room.

TSN: What's your favorite part of the show?

CR: I don't know if there's a favorite part because I have grown to love this show immensely. And I have to credit the director, Bill Fennelly, who collaborated with me and listened to the realness that I wanted to bring to it, and the authenticity. Not these stock characters—I wanted to bring characters – and he did too – that were real women, flawed woman, because we are all flawed and we didn't want someone to be the evil person and the angelic person. We all have our issues and are human.

The one part that was very daunting to me was the Coopers Union part where the audience gets a chance to sing along. And to hear the audience singing a song that was a message song from the Underground Railroad, or the auction block song, or the Kumbaya song, and to have them know where these songs came from, I think that's quite moving.

We're doing a call and response and I'm having the audience sing, "Many Thousand Gone." Because there is a song that goes, "No more auction block for me/No more no more/No more auction block for me/Many thousand gone." And to have them feel what that song means and to know that probably 95 percent of them had never heard that song before and now they're singing it. Or not to know where "Kumbaya" came from, not to know that those words were island words, those are broken English words or derivative of an African language. And it's been this protest song so long – but not to know where these songs derive from. And so I think it's educational for a lot of people too.

The discussions are in the Ellyn Bye Studio immediately following the Sunday matinee performances (tickets are sold out for June 10). Admission to the discussions is free. No RSVP or ticket is required.